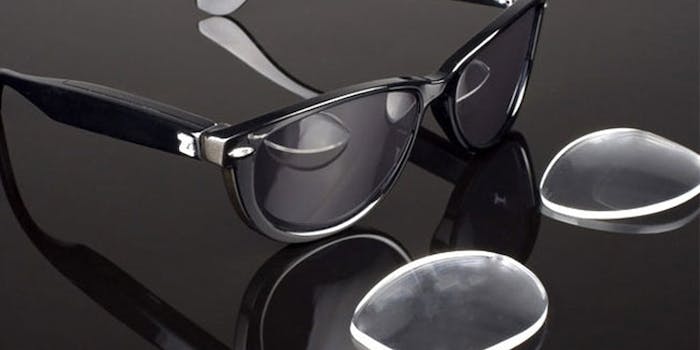 Kickstarter scammers cheat backers out of $344,000

The funders thought they'd be receiving some space age glasses. Instead, they got nothing.

Kickstarter bandits have made off with nearly $344,000.

The Eyez glasses could supposedly record video straight from your line of vision and upload it to Facebook. All in all, 2,059 backers (those who pledged $150 or more) were promised one set each by “the winter 2011 season.”

It’s now the summer of 2012, and those backers still haven’t received a thing.

What’s more, no one’s heard from the project’s creators since April ’10, when the team announced it would need eight to 12 more weeks to design and test the glasses and another 12 to 16 weeks to manufacture the first round of rewards. (Chief Technology Officer Joe Taylor did not respond to a request for comment from The Daily Dot.)

Aggravated backers have turned to the campaign’s comments section to voice their complaints in hoards.

Some have threatened class action lawsuits while others, such as backer Lawrence Ku, have suggested that the team band together and hire a hitman to “find Joe Taylor and his pals and hammer them to an inch of their lives.”

The hired muscle will have a hard time finding the purported scammers, who have been just as slow to respond to backer emails as they have in delivering on their promises.

“What happened to your claims of 48 hour response times?” backer oxymandias asked. “I have sent you *repeated* emails asking you questions—and you have not bothered to reply.

“In fact, over the last month, I have sent you 12 emails—and only one of those emails got a reply — which consisted of a copy/paste of the kickstarter update—despite the fact that that was *not* actually an answer to the questions I asked.”

On Saturday, backer Mårten Brödje posted a comment on the Eyez page detailing an email that he’d received in response from ZionEyez:

Hi Marten,
Thanks for reaching out to us.
Our next update will cover all the questions you’re inquiring about. We will be releasing it in the near future to update all of our Backers on the status of Eyez.
Best Regards,
The Zeyes Team

But as Eyez’s backers have learned, “the near future” doesn’t mean much to ZionEyez. As oxymandias wrote in response to Brödje’s post, “they have been saying that a new update … would come in the ‘near future’ for several months now.”

Kickstarter has made it clear that the company does not offer refunds for ill-fated projects and that “it’s in the backers’ hands to exert collective pressure” on a project creator who’s gone AWOL.

Whether or not that means bringing in a hit man to “find Joe Taylor and his pals and hammer them to an inch of their lives” is anyone’s guess.

Correction: An earlier version of this story described Joe Taylor as the leader and point of contact for the ZionEyez project. He was not responsible for the company’s correspondance. We regret the error.