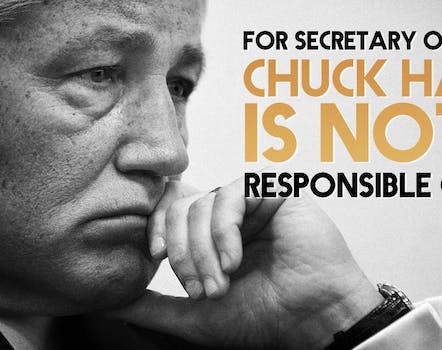 The Emergency Committee for Israel wants to air their grievances with Sen. Chuck Hagel, President Obama's nominee for Secretary of Defense, and they're using ChuckHagel.com to do it.

It shouldn’t surprise anyone that when rumors swirled that President Obama would nominate Chuck Hagel to be the next Secretary of Defense, as he did Monday, more people searched for Hagel’s name than on any day in history. As you would expect, the first few pages of Google results are mostly news articles on the Republican former senator.

But anyone who took the trouble to type out www.chuckhagel.com found a very different story.

That’s because the Emergency Committee for Israel (ECI), which strongly opposes Hagel’s nomination, bought the domain name to highlight their grievances with him. Examples of their criticism, like his use of the phrase “Jewish lobby” in 2007 to describe Israeli influence in the U.S. Congress, are splayed across the page.

According to Domain Tools, the site’s current owners—presumably the ECI, which didn’t return request for clarification—bought the ChuckHagel.com domain name in July 2012, and have it registered for another 18 months. It’s unclear what the site looked like immediately after the ECI bought it, though according to saved pages on Archive.org, for years, the site simply offered a white background with the words “ChuckHagel.com” in large red letters. The current, sleek anti-Hagel version of the site was last updated Wednesday.

Cybersquatting, or buying a domain name clearly associated with a trademark in order to resell it for a profit, is illegal. But in politics, identify squatting, or using someone else’s name as a URL for personal or professional gain, is common. In September, the nonprofit group Coalition Against Domain Name abuse found that more than a quarter of Congress had been targeted by domain squatters.

The ECI has a history of accusations of misleading the public. Its three board members, including Weekly Standard founder William Kristol, are all American citizens.

Hagel must pass a Senate confirmation hearing before starting the job.

“I fully recognize that confirmation is up to the Senate. All I ask is a fair hearing, and I will get that. I am very much looking forward to having a full, open, transparent hearing about my qualifications and my record,” Hagel told the Lincoln Journal-Star Monday,