It’s one of the largest citizen uprisings ever seen on Facebook.

It’s one of the largest citizen uprisings ever seen on Facebook. It left the U.S. Department of the Interior with hundreds of messages urging immediate action. And who’s behind it? People who love horses.

Yes, you read that correctly.

“I want to make sure Secretary Jewell got the #StepInSally message that Americans like me are counting on her to act to reform the BLM’s wild horse program just like the National Academy of Sciences suggests to #KeepWildHorsesWild and save taxpayer dollars.” 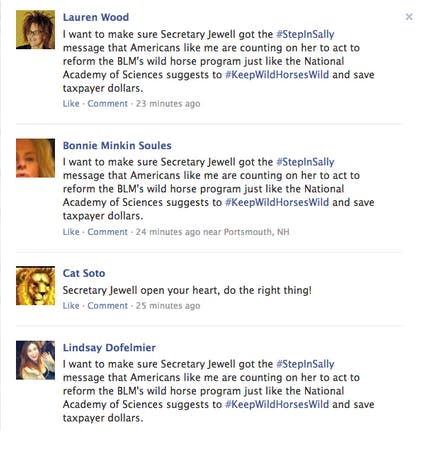 That message, along with others encouraging an end to the program, were aimed at Secretary of the Interior Sally Jewell. And accompanying the massive amount of Facebook activity was an open letter signed by over 30,000 people, including 30 members of Congress.

The wild-horse program in question is under the Bureau of Land Management. It’s received negative feedback from the American Wildlife Preservation Campaign. The program also received a less-than-flattering review from the National Academy of Sciences in a recent report that said that program was “expensive and unproductive,” citing a press release by the preservation campaign.

The campaign went on to criticize the fiscal implications of the program and what they characterized as inhumane treatment of wild horses and burros.

As of Thursday afternoon, no one from the Department of the Interior has responded publicly to the messages on the Facebook page. But with several posts coming in every minute, this is an issue that might be hard to ignore.

Moral of the story: Seabiscuit has quite a few friends.