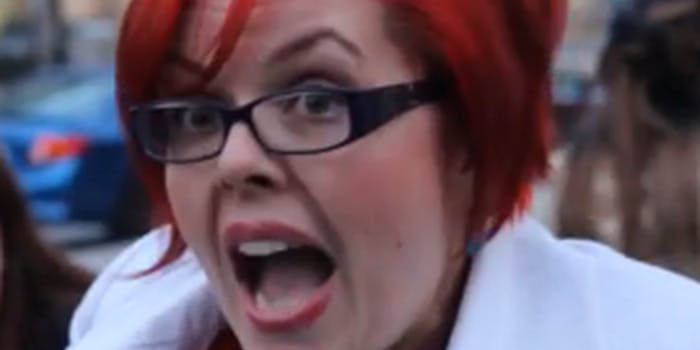 Due to men's rights harassment, numerous women have had their personal information made public, received rape and death threats, and even lost their jobs over the last year.

Over the last year, the online men’s rights community has made life difficult for a number of feminists. Numerous women have had their personal information made public, received rape and death threats, and even lost their jobs.

Now the misogyny call-out blog Manboobz is reporting that yet another feminist, a Canadian blogger, has gone into hiding after being doxxed and bombarded with death threats.

The men’s rights group Equality Canada has been busy sponsoring lectures and talks at the University of Toronto over the past year. The talks have drawn intense protests from feminist activists, who have attempted to blockade entrances, gotten arrested, and pulled fire alarms to disrupt the events.

The central goal of the men’s rights movement is, in its own way, to promote gender equality. But the group views feminism as the dominant political force bringing down men, and so many feminists find the agenda harmful because of the hate speech it breeds.

Earlier this month, one feminist speaking outside the latest campus MRA event attempted to address a group of attendees by reading from a list of things that both MRAs and feminists want. The list was intended to show MRAs how similar their goals were to feminists’.

However, perhaps because her group had protested loudly throughout the event and pulled a fire alarm to disrupt it, when the protester began reading her list, she was repeatedly interrupted and drowned out by her audience. The scene was caught on YouTube and uploaded, where it spread widely among MRAs. Many touted the woman’s fiery reaction as evidence of the evils of feminism itself:

MRAs on sites like YouTube, Reddit, A Voice for Men, and Crimes Against Fathers went into action, repeatedly declaring her “evil.” A Voice for Men blogger Dan Perrins dubbed her the “Little Red Frothing Fornication Mouth,” snarking about her “sheer tits in your face gumption.”

The Amazing Atheist, a vlogger who notably denounced the first of Anita Sarkeesian’s Tropes vs. Women in Video Games series, called her group of feminists “a bunch of mindless, cackling cunts” in a YouTube video that has received over 200,000 views and 15,000 thumbs up.

But they didn’t stop there. The blogger told Manboobz’ David Futrelle that she had been receiving nonstop harassment ever since the video went up two weeks ago:

Because I had the audacity to tell a dude to STFU, an MRA no less, I have since been the target of not only just online misogyny (as if that’s a surprise) but cyberstalking, rape and death threats. …

I dunno how many haters I have, and I don’t know where they are. I can’t be sure at any given second, if I’m ever outside my house … if anyone is going to recognize me and try to hurt me.

The men’s rights community had turned her into a meme, she said, pointing to crude image macros comparing her to Pennywise the clown, and other pictures that aired her address and phone number alongside comments she’d made on her various accounts. 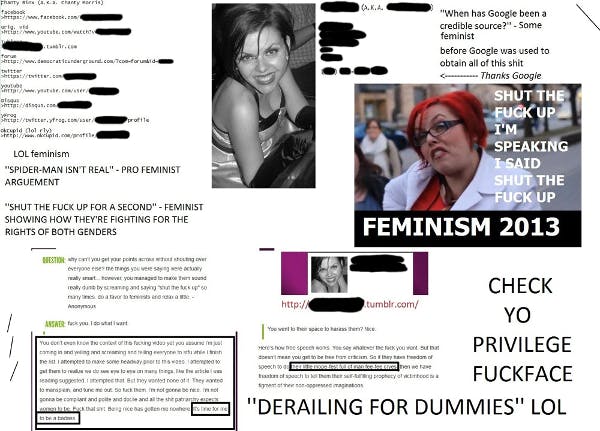 On Tumblr, condemnation was swift. Playwright Sabina England called it “a serious reminder that women are not safe anywhere.”

“It blows my mind how people are accusing the red-haired feminist activist of ‘bullying tactics’ and opposing ‘freedom of speech’ and ‘silencing’ the MRAs,” wrote theaetherealmeadow. “She had her personal information plastered all over the Internet, and is having people stalking her, and has endured countless death and rape threats. … Now THAT is bullying and silencing tactics.”