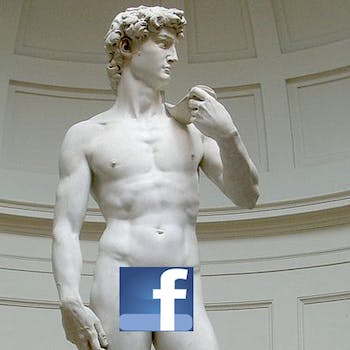 The penis study Facebook didn’t want you to see

The social network took down a post published on Scientific American's page because it violated the company's policy on "Nudity and Pornography."

Facebook is firm about upholding its ban on nude images, even if they’re for science.

Yesterday, the social network took down a post published on Scientific American‘s page because it violated the company’s policy on “Nudity and Pornography,” which “impose[s] limitations on the display of nudity.”

The offending post was a link to a Nature story about a study that found women prefer men with big—but not too big— penises. The story, based on peer-reviewed research from the Proceedings of the National Academy of Sciences, was accompanied by a computer-generated graphic showing a series of e-men and their digitally-created junk.

On Wednesday, Scientific American confirmed via a Facebook post that it wasn’t an algorithm that led to the deletion, but an actual human being.

“Facebook reached out to us to say that a committee of reviewers made the decision to delete our post about a research paper on penis sizes, not an algorithm,” the note read.

“The issue was the graphic that accompanied the story, which showed computer-generated images of nude men. FB only makes narrow exceptions for nudity—you can post a photo of Michelangelo’s David, for instance.”

A spokesperson for the social media giant further defended the decision to yank the science article by telling Forbes that their “policies are designed to ensure Facebook remains a safe, secure, and trusted environment for everyone on Facebook, especially minors who use [their] site.”

“Keep in mind,” the representative added, “there is a great deal of complexity when applying policies that attempt to account for every single image across the spectrum of depiction of nudity. It is also important to note that we have no issue with the article itself, only the image included.”

Facebook has previously cited this same policy to take down images of mothers breastfeeding, works of art, a photo of a cancer survivor showing off her tattoos, a New Yorker cartoon, and a suggestive picture of a woman’s elbow.