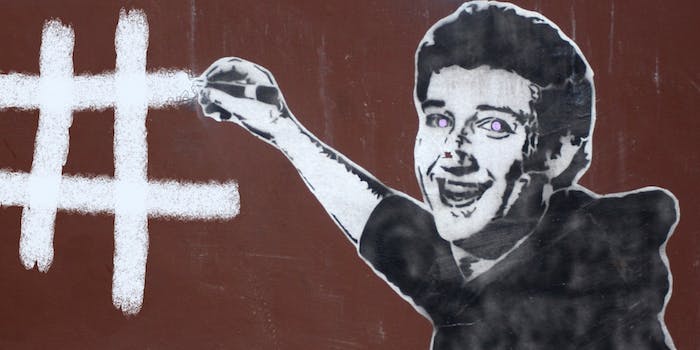 Now Graph Search can connect you to other users via common #interests.

Facebook‘s finally gotten with the program and added support for clickable hashtags.

The company noted that all those pointless plaintext tags your friends have been including in their posts for years actually serve a purpose now. You can click on them or search for tags from your search bar. If you’re browsing the search results for a tag, you can jump into that conversation by composing a post from that page.

“Conversation” being the key word.

As I noted earlier this week, hashtags have risen to popularity as an organizer of public conversation around a certain topic. Previously, there was no good way to do that on Facebook. Searching for posts doesn’t really work in Graph Search, and not everyone interested in a TV show or movie will flock to its Facebook page to discuss it. Talking about it on their own timeline is far more likely.

Hashtags were first proposed by designer Chris Messina in Aug. 2007 as a way to organize conversation in groups or topics on Twitter. They became an important part of the network and the concept later spread elsewhere, to Instagram, Google+, and Vine to name a few.

It’s not so much that Facebook, confirming reports from March, is ripping a leaf out of Twitter’s playbook as it is the company playing catch up. Pretty much every one of its rivals has hashtag support.

Better yet, it means the hashtags that appear on Instagrams and tweets cross-posted to Facebook actually have a purpose now.

Facebook’s privacy settings are still in effect. If you’ve added a tag to a friends-only post, only your pals will be able to see it.

Facebook added that trending hashtags and “deeper insights” are coming soon. If you can’t click on tags just yet, don’t worry. The company seems to be slowly rolling tag support out.