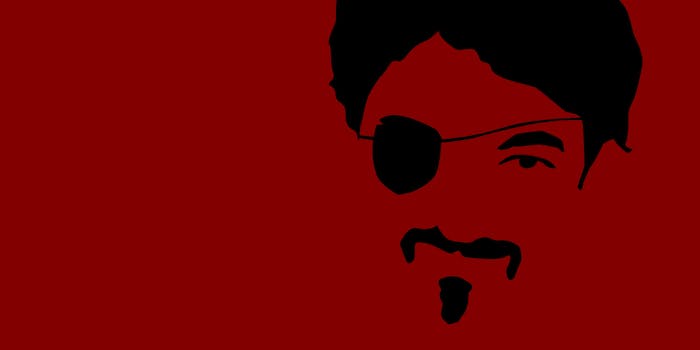 Dread Pirate Roberts admitted to being “a little disturbed” but “OK.” “I’m just new to this kind of thing is all,” he said.

Less than a day after the FBI seizure of Silk Road and the arrest of alleged founder Ross William Ulbricht, a Maryland indictment has been released charging Ulbricht with 1) conspiracy to commit murder of a witness; 2) use of interstate commerce in murder-for-hire; and, of course, 3) conspiracy to distribute a controlled substance.

This morning’s criminal complaint alleged that Ulbricht sought to murder a user named FriendlyChemist in March 2013 because of apparent extortion. The FBI says that Ulbricht, using the screenname Dread Pirate Roberts, paid $500,000 to have the man killed in Canada, but no records of such a murder have been found so far.

This indictment brings new charges into the fray.

In December 2012, an undercover federal agent began to ask Dread Pirate Roberts about smuggling large quantities of drugs over borders. According to the indictment, the agent asked for DPR’s help in finding customers because, he said, “Silk Road sellers only want very small amounts.”

DPR helped find the agent a buyer for one kilogram of cocaine for $27,000 in bitcoins. A paid employee of Silk Road set up a deal with a Silk Road vendor who would later sell the drugs on the site. The drugs were soon delivered.

In January, DPR contacted the undercover agent. The employee had been arrested, he said, and he’d stolen funds from other Silk Road users by abusing his staff ability to see all private messages on the site. DPR was afraid that the employee would give up valuable information to the police and so, within a day, he asked the undercover agent to murder the man.

The employee “was on the inside for a while, and now that he’s been arrested, I’m afraid he’ll give up info.” DPR added that he’d “never killed a man or had one killed before, but it is the right move in this case.”

DPR agreed to and paid $80,000 for the murder of the employee, half before the job and half upon completion. On February 4, 2013, DPR transferred $40,000 from Technocash Limited in Australia to a Capital One bank account in Washington, D.C.

The next day, he asked for “proof of death” in the form of video or pictures. “They should probably just give him a note, let him use his computer to transfer the coins back, and then kill him,” DPR wrote to the agent. DPR was most concerned about “silencing him” rather than “getting my money back.”

“Considering his arrest, I have to assume he will sing.”

On February 12, the agent told DPR that the assassins were in place, only waiting because the employee lived with a wife and daughter. The agent said that once his family had gone, assassins would torture the employee to get stolen money back, take him out of the house, and then kill him.

The agent communicated to DPR that the employee was being tortured and broken for several days. On February 16, staged photos were sent to DPR as proof of torture. DPR admitted to being “a little disturbed” but “OK.” “I’m just new to this kind of thing is all,” he said.

Contemplating his actions, DPR wrote, “I don’t think I’ve done the wrong thing. I’m sure I will call on you again at some point, though I hope I don’t have to.”

On February 19, the agent told DPR that the employee had been killed by “asphyxiation/heart rupture” while being tortured. Another staged photo was sent to DPR as “proof of death.”

In response, another $40,000 was wired to the Capital One bank account.

Since the recent release of the indictment, the Daily Dot has spoken to several Silk Road vendors who confirmed they’ve been hearing stories about this attempted murder for many months now.

According to two anonymous sources, the employee handled many front-end technical issues for Dread Pirate Roberts. He apparently stole bitcoins from Silk Road by redirecting the address at which commissions from the marketplace were sent.

It’s not clear what has become of the employee, but one particularly interesting theory has become popular among several Silk Road Vendors: Law enforcement positioned themselves as trustworthy and able to help DPR out of tight situations such as these. DPR, knowing many of his staff’s identities, handed over all of his information to the undercover agent. The agent co-opted the mod, made him a police puppet and then a gruesome star of fake death photos.

Of course, that’s just a theory. But in this bizarre drama, straight out of an AMC plot, it’s as good a theory as any.