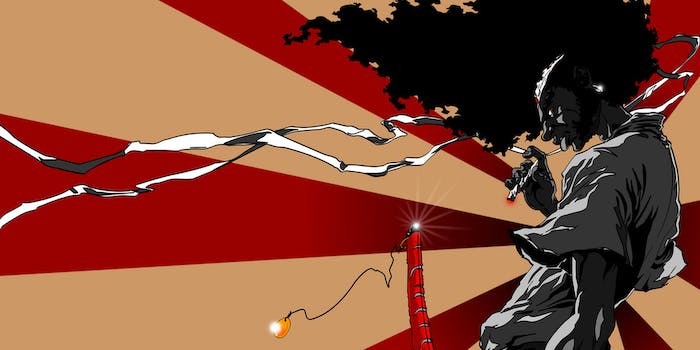 Police killed a black man with a toy sword

The Utah police fatally shot 22-year-old Darrien Hunt on Wednesday. He was holding a fake samurai sword, which led some to believe he was cosplaying, or costume playing, as Mugen from the popular anime Samurai Champloo.

This is what Hunt was wearing when he was killed. Compare to the character from Samurai Champloo. Was he cosplaying? pic.twitter.com/TlFS49OTYJ

Hunt was killed outside the Panda Express in Sarasota Springs, Utah, after police responded to a complaint of a “suspicious individual” with a sword.

The initial police statement claimed that Hunt had “brandished the sword and lunged toward the officers with the sword” before they shot him.

Hunt’s family, however, is claiming that a private autopsy shows Hunt was shot in the back numerous times, and that multiple witnesses saw him running away from the police.

Hunt’s case is eerily similar to another recent police shooting that took place in the toy department of Walmart. On Aug. 5, John Crawford III from Dayton, Oh., was also shot and killed by police who mistook his toy weapon for a real one.

In both cases, police responded to a call of suspicious behavior. In Crawford’s case, witnesses stated that he was talking on his cellphone and leaning on a toy rifle that he had picked up while shopping in the store. Witnesses speculated that Crawford did not hear police directions for him to turn around, since he was shot while still holding his phone.

Both Utah and Ohio have open-carry laws, but the “weapon” in both of these cases was a toy—in Crawford’s case an unpackaged BB gun, in Hunt’s case a blunt-edged fake replica of a katana, or Japanese sword. Even if Hunt’s sword had been real, it is legal to publicly carry a sword under Utah’s open-carry law.

The original police statement claimed that “there is currently no indication that race played any part in the confrontation” that left Hunt dead. However, given that Saratoga Springs is a Ferguson-sized small town that is 93 percent white, many are skeptical that its 65-member police force has been completely forthcoming about the incident.

On Sunday, the Saratoga Springs police department issued a now-deleted Facebook post that called for patience with the investigation into the incident, claiming that news reports about the incident had been exaggerated:

Everyone should remember that the news outlets have ratings they need to gain. They don’t report facts. They use innuendo, opinion and rumor and then report it as fact. The same thing happens here on FB and other social media. The real facts are being determined by an independent investigation, and not in a rushed or haphazard manner. When those facts are gathered and analyzed, they will be reviewed by independent legal authorities. There is no cover up and there is no corruption. While this process is played out, we ask all persons to have patience with the process and allow the process that has been legally established to go forth. No one has been charged with any crime. The law has established that there must be probable cause for charges to be filed. Then even when and if charges were filed, in this country, all persons are innocent until proven guilty. This protection is extended to all persons, including cops.

Hunt’s mother, Susan Hunt, told the Deseret News that a picture she received from a witness taken just before the shooting shows her son standing peacefully, the sword nowhere to be seen. In the picture, he is reportedly flanked on both sides by policemen. Moments later, he would be dead.

“No white boy with a little sword would they shoot while he’s running away,” she said.

Witnesses who saw Hunt before the shooting were divided on what his behavior was before the incident, with one witness saying he appeared calm and others claiming he seemed distressed. Hunt’s outfit at the time he was killed indicated that he may have been cosplaying as Mugen from Samurai Champloo, a character who is known for his erratic behavior and large sword.

Ironically, although Mugen is a samurai, near the end of the series he ultimately walks away from violence.

Tragically for Hunt, the chance to walk away never came.

Update: A new photo of Hunt taken before the altercation has been published by the Guardian and ABC. Judging from his appearance, it’s unlikely he was cosplaying as Mugen and that any similarities were coincidental. We have updated this story and our headline for clarity.