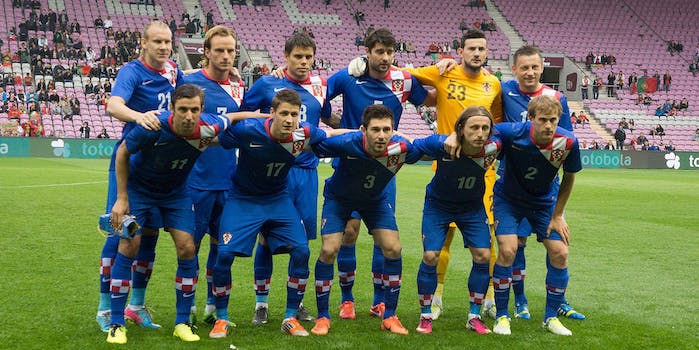 Nobody is sure when the players will speak to the press again.

The FIFA World Cup is here, and drama is coming thick and fast—both on and off the pitch. This weekend we saw reigning champs Spain humiliated in a 5-1 defeat by the Netherlands, as well as the Croatian side suffering a 3-1 loss to tournament hosts Brazil. Croatia’s woes haven’t ended there, however.

Now, photos of the soccer team at their post-game swim have leaked online, with BuzzFeed among the outlets publishing the shots. The photos—apparently taken by two journalists hiding in the bushes—show the team relaxing around the edges of their hotel pool—and all stark naked.

The response from the Croatian has been furious. The coach, Niko Kovac, announced that the team had decided on a total boycott of the press in response to this intrusion into their privacy: “I can’t force them to be at your disposal after what you have done to them and their families,” said Kovac; “How would you feel if someone took naked pictures of you?”

“They are adamant that they won’t speak to you lot any more and I don’t know whether the silence will end tomorrow or last until the end of our World Cup campaign,” he went on, speaking to reporters at the team’s training base in Praia de Forte; “I respect my players opinion and I also know that you have done a very professional job so far but you blew it with this one. The whole world has seen the photos.”

Is this an overreaction to some excitable paparazzi, or a justified response to a gross intrusion into players’ privacy? According to some perhaps over-zealous Internet sleuths, the answer is neither—instead, we need to pull back the curtain and reveal this for what it truly is: a PR stunt.

As “Sandor” has commented on the BuzzFeed article:

This is a publicity stunt, not a very thought out one but a publicity stunt nevertheless. I mean, compare a normal paparazzi pic and these, the usual ones are all grainy, but these were taken by a true pro. Note how there is no full frontal nudity, the one holds his package, the other is just walking around (and the pap only gets him from the side – sure!) while the third one’s peen is concealed by a conveniently placed leaf. Duh, amateurs.

It is true that none of the photos show the team in a bad light, but that also may be because the photographers opted not to sell—or news outlets opted not to buy—particularly graphic photos. It also raises the important question of exactly what the Croatian team stands to gain from such a “stunt.”

Perhaps Cameroon will be intimidated into submission by their impressive physiques ahead of their match in Manaus in Wednesday—or maybe the press has, once again, over-stepped the mark. We’ll let you decide.