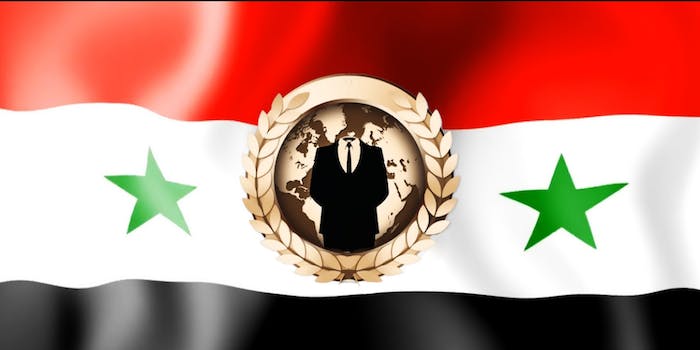 Anonymous takes aim at Assad and the SEA

The hacktivist collective doxed five key members of the Syrian Electronic Army. But there was more. Much more.

We’re not at war with Syria, although someone should really tell that to the Syrian Electronic Army. They’ve been very successful at taking over, and taking down, sites from the New York Times to the Marines and not excluding the Daily Dot. In return, they’ve been hacked and doxed with varying degrees of effectiveness, but Syria itself has not been a target.

Anonymous’ #OpSyria seeks to support the people of Syria and oppose President Bashar al-Assad’s regime, while still not advocating a formal declaration of war. Anonymous is casual like that.

Dictator Assad and elements within the Syrian Opposition, you now have the undivided attention of Anonymous. Our request is a simple one; cease fire immediately and stop the violence towards the innocent or you will feel our wrath. We are oceans far from you, but closer than the jugular vein.

Monday night, they sprang into action, taking down thawraonline.sy, a media/propaganda site; albaathmedia.sy, the site for the Syrian Renault dealership; and the official government sites for Damascus and Aleppo, among others. They leaked emails of government users. According to Blackplans, they have positively identified—that is, doxed—five key members of the Syrian Electronic Army (although the Jester, as always, tried to claim credit). But there was more. Much more.

We live in a new world. A world in which YOU can make a drastic difference as an activist from your computer in the state of #Syria #OpSyria

I was contacted by Luminary, one of the key figures of #OpSyria, and alerted to another hack: the Syrian customs system, the master index of every item that enters the country. Apparently the digital border is as porous as the geographic one, because they grabbed masses of data from the website, not all of it of obvious interest or purpose.

“It’s really not that interesting. Just funny that we took it :D,” he told us.

In the Pastebin document in which they posted some of the highlights, they included a hit counter for the website (my personal blog gets more traffic) and said, “This serves no actual purpose other than for us to laugh that we retrieved it. This entire database has basically been our playground.” Also included were a cross-section of emails—hotmail, Syria, really?—and some mysterious codes.

Gather round, children, and listen to the story about the time Anonymous kicked the Syrian government in its bollocks. It was a warm September’s evening on planet Earth. People all around were threatening to launch missiles at each other and we were, as always, being hackers on steroids.

So we decided to roll our main battle tank of highly sophisticated intrusions over to the enemy fort being guarded by Syria. Hilariously, they were too busy defending their airfields for the imminent cruise missile strike to notice as we quietly and swiftly snuck in and started making off with their booty.

Below is a vast amount of text data, some of it we don’t even know the meaning of, from customs.gov.sy. All of this information came directly from a Syrian government database and was trying to not be seen. But because the Syrian  government was too busy spending money to gas their own civilians, they couldn’t be bothered to exhibit any signs of securing their own shit. (print that word in the press, please. :D)

As always is the tradition:
Syria, umad?

In case the press wants proof that we did in fact hack into the Syrian customs like stated, here’s the link to the vulnerability. We invite any curious journalists and detractors to visit that link, stick an apostrophe onto the end of that bitch and watch the SQL errors flow.

For the record, yes, I saw the SQL errors. And now I suppose I can’t go to Syria anymore.

If you’re thinking, “Hey, wait a minute, Anonymous opposes war with Syria, doesn’t it?,” you’d be partly right. As always in the hacktivist collective, the left hand may not know what the right hand is doing, and in fact the various hands of Anonymous are often not even speaking to one another. That explains why YourAnonNews released (with great fanfare) a list of phone numbers for state representatives and senators, encouraging people to call and demand that their elected officials vote down any initiative to authorize war with Syria. But that’s #OpSyria911, not #OpSyria.

Luminary wanted us to pass along a message:

We did it for two things: The people of Syria against their oppressive regime.

#OpSyria is ON! EXPECT US! #Anonymous