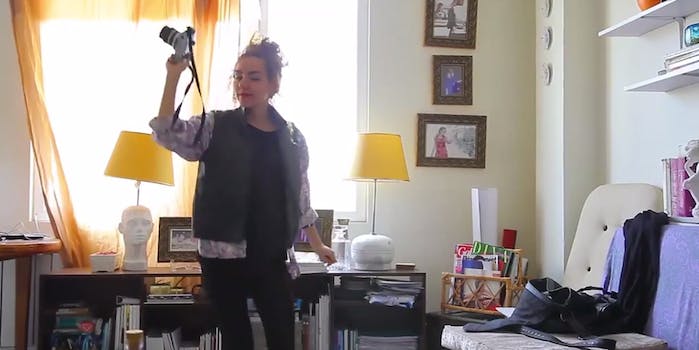 The video was celebratory and carefree, but the mood has drastically changed since.

In a cruel turn of events, six people were arrested by Iranian authorities Monday after a video of them dancing to Pharrell Williams’s “Happy” appeared online.

The video looks like countless other “Happy” videos. In it, men and women are seen dancing on roofs and in houses, often together. It’s celebratory, careful, and playful. You can just tell they’re having a good time. The women are not wearing hijabs.

The original video was removed, but it had been reuploaded many times since it first made its way online last month. The producers told Iran Wire that the video was an effort to show the world that Iran was a better place than everyone thought.

Authorities investigated the video after it went viral.

Women are required to wear hijab in public per a 35-year-old Iranian ordinance, something many women in Iran are trying to protest. Dancing and showing men and women dancing together are also “red flags,” according to Iranian freelance journalist Negar Mortazavi.

After the people in the video were identified, they each received a phone call informing them that a friend had been in a car accident and required their presence. Once they arrived, they were swiftly arrested. According to Iran Wire, authorities allegedly told families that they would not release their children if they spoke to the media.

The six people were later shown on Iranian TV from behind as they were interrogated by police. The performers confessed that they were deceived into making the video and begged producers not to put it online.

Williams has since spoken out against the arrests.

It’s beyond sad these kids were arrested for trying to spread happiness http://t.co/XV1VAAJeYI