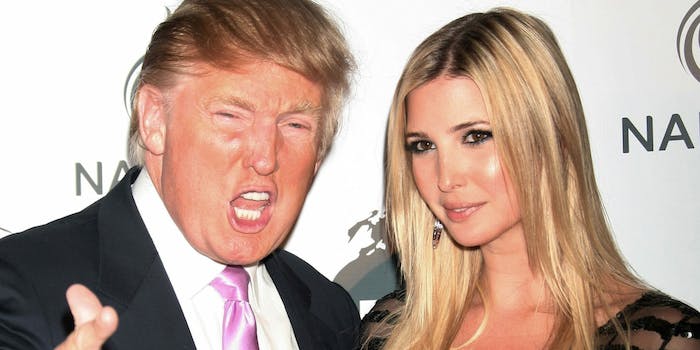 This may be Donald Trump’s most disturbing tweet ever

In the vast expanse of controversial things President Donald Trump has tweeted over the years, the internet has resurfaced what may be the most disturbing.

Back in 2013, years before becoming president of the United States—the person capable of appointing federal judges and reshaping the judicial system in ways that echo his beliefs about right and wrong—Trump boasted about his penchant for dating young women.

@rexrode_lisa
"@realDonaldTrump you date girls young enough to be your daughter.That's perverted" Dated. No, that's talent.

Trump’s disconcerting desire for women many decades his junior is well documented. But this tweet now reflects shades of darkness that were, until just weeks ago, seemingly invisible to a significant portion of America.

Today, this tweet evokes the predatory nature of powerful men who have found themselves suddenly outcast for victimizing women. It especially calls to mind Roy Moore, the Republican candidate for Senate in Alabama, who stands accused of molesting a 14-year-old girl at the age of 32 and attempting to rape a 16-year-old in 1975, when Moore was in his late-20s.

It also, of course, reminds us of allegations against Trump himself. At least 16 women say the businessman and former reality TV star sexually harassed or assaulted them—people the White House dismissed as recently as Oct. 27 as liars. Then there’s the 2005 Access Hollywood tape in which Trump boasts about his ability to sexually assault women with impunity because he’s famous. Many thought that would be the deathblow to Trump’s presidential campaign; it was ultimately just a speed bump—one that likely shook loose the outpouring of revelations from countless women whom men harassed, abused, assaulted, degraded, and otherwise victimized.

Finally, there is the baffling nature of Trump’s relationship with his eldest daughter, Ivanka, whom he called “hot” when she was 16 years old and has since described as “voluptuous” and a “piece of ass” with the “best body.” And that’s what he’s said in public.

With new revelations about men using their power to victimize women emerging seemingly by the minute, one must ask: How long will America stomach the digressions of the most powerful man of them all?