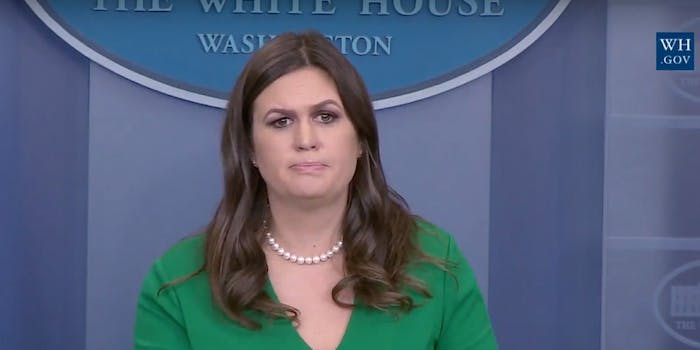 Press secretary Sanders the administration has 'been clear.'

White House press secretary Sarah Huckabee Sanders said Friday that the administration has “been clear” in its assertion that the women who have accused President Donald Trump of sexual harassment are lying.

Sanders made the statement in response to a question from CBS News reporter Jacqueline Alemany.

“Obviously sexually harassment has been in the news. At least 16 women accused the president of sexually harassing them throughout the course of the campaign,” Alemany said. “Last week during a press conference in the Rose Garden, the president called these accusations ‘fake news.’ Is the official White House position that all of these women are lying?”

“Yes. We’ve been clear on that from the beginning, and the president has spoken on it,” Sanders said.

Last week, lawyers for one of the women who has accused the president of sexual assault filed a subpoena demanding the White House turn over documents from the presidential campaign regarding “any woman alleging that Donald J. Trump touched her inappropriately.”

Trump has denied any allegations, calling his accusers “horrible liars” and threatening to sue them. Last year, Trump tweeted the women’s allegations were “totally made up nonsense to steal the election.”