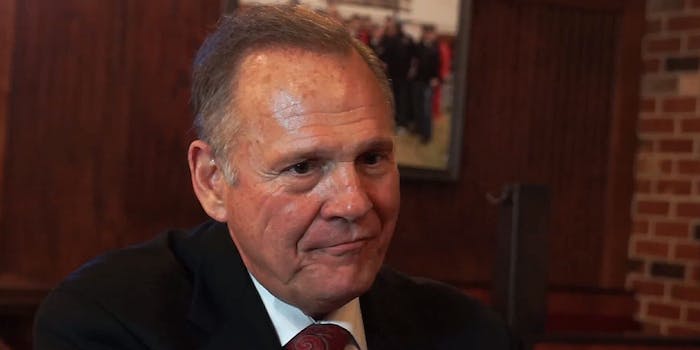 It also canceled a field program that was set up for Alabama's Dec. 12 special election.

The Republican National Committee is ending its support of Alabama Senate candidate Roy Moore as a result of several women coming forward with stories of sexual misconduct.

On Tuesday the RNC withdrew from a joint fundraising agreement with Moore that would benefit his campaign. It also canceled a field program that was set up for Alabama’s Dec. 12 special election. According to Politico, the RNC had about a dozen paid canvassers in Alabama working for Moore, but it will no longer give any money to the campaign.

Moore has been accused of sexual misconduct by five different women, who said the incidents happened when they were teenagers and he was in his 30s. The latest accusation came Monday, with a woman saying Moore sexually assaulted her when she was 16 years old.

Moore has called the news “completely false.” He said the women are making an attempt to attack his character and his reputation in order to stop his campaign for Senate.

“Nobody that abuses a 14-year-old at age 32 or at age 17, it doesn’t matter, if you abuse a 14-year-old you shouldn’t be a Senate candidate,” Moore said on The Sean Hannity Show last week. “I agree with that. But I did not do that.”

On Monday National Republican Senatorial Committee Chairman Cory Gardner said if Moore refuses to withdraw and wins, the Senate should vote to expel him.

The Alabama Republican Party is still participating in the joint fundraiser.