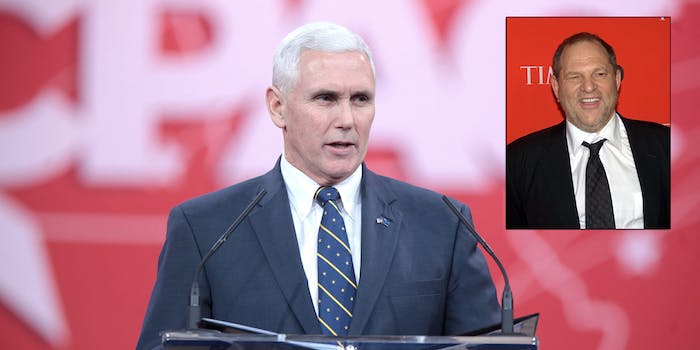 While the connection is odd and the two things really have nothing to do with one another, that hasn’t stopped several conservative voices from somehow saying that Pence’s rule–not being alone in a room with a woman other than his wife–is somehow a golden standard for not committing sexual misconduct.

Weinstein stands accused of committing sexual crimes over the course of decades. Several women, including Angelina Jolie and Gwenyth Paltrow, detailed instances in which Weinstein allegedly asked to meet them in his hotel room, where, they say, he made unwanted sexual advances. For some conservatives, the problem isn’t simply Weinstein’s allegedly predatory behavior, it’s the setting.

“For those keeping score at home, Mike Pence could never be accused of wanting to have sex with someone other than his wife in these sorts of situations because he avoids putting himself and the other person into these situations,” writes Erick Erickson, of the Resurgent, a conservative blog.

Sebastian Gorka, a former member of President Donald Trump’s administration, went a step further, saying that Weinstein’s victims would not have been abused if he followed Pence’s rules.

“THINK: If Weinstein had obeyed @VP Pence’s rules for meeting with the opposite sex, none of those poor women would ever have been abused,” he wrote on Twitter on Tuesday night.

“The left was more upset at Mike Pence for being loyal to his wife than they are upset at Harvey Weinstein’s sexual assault actions,” he tweeted.

The comments by these conservatives seem to all revolve around one message: being alone with women offers the opportunity or temptation to assault them. Is the only thing standing in the way of sexual abuse not allowing yourself to be alone in the same room with a woman?

By adhering to Pence’s rule, it reinforces the (false) idea that all interactions between men and women are sexually charged and a third-party is necessary to stop anything from happening, consensual or otherwise. By not putting oneself in that position, some argue, there is no moral quandary a man has to face, not to mention an admission of a lack of trust in oneself.

“The media and the left savaged Mike Pence for his principled stand, but they will never run stories about Mike Pence sexually harassing women. They’ll never run stories about women unsure whether Pence was propositioning them or if they were reading too much into something. And Mike Pence’s wife, who is the most important person in Pence’s life, will never have to worry about his fidelity.”

Essentially, Erickson is arguing that because Pence never puts himself alone with women, there is no opportunity for him to commit a sexual assault–or to be accused of committing sexual assault—which is ignoring the obvious: Being alone with a woman is not an invitation to rape her. The assumption that sexual assault or harassment only happens when women are alone is also not true.

All of this doesn’t even take into account how Pence’s “rule” also puts women at a professional disadvantage, which was written about at length following an article that highlighted Pence avoiding one-on-one meetings with women.

But Erickson isn’t alone. The idea of equating Pence’s rules and Weinstein’s alleged misconduct is running rampant on right-wing Twitter.

Hey #StupidLiberals, who respects women more @mike_pence, who doesn’t have private meetings with them, or @HarveyWeinstein, who does?🤔

Harvey Weinstein allegedly rapes young actresses, but remember Mike Pence who does not have dinner on his own with young women – MONSTER!

Pence’s rule and Weinstein’s sexual abuse both inherently show that men see women as beneath them, albeit in different ways. Sarah Skwire, of the Foundation for Economic Education, summed up the situation well: “Don’t isolate [women] behind locked doors. And don’t grope them there either.”