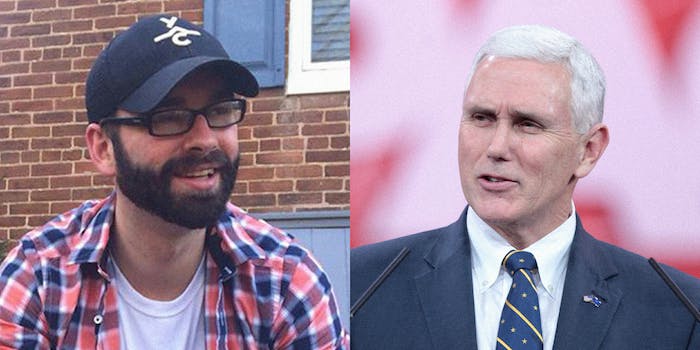 2,000 people have chimed in to laugh at this blogger’s dumb take about Mike Pence and women

Mike Pence has a questionable stance on the sexes, and this man who agreed with him got wrecked so hard.

On Wednesday, good people of the web delighted in an absurd reveal made in a Washington Post profile about Vice President Mike Pence.

Pence, the article said, “never eats alone with a woman other than his wife and that he won’t attend events featuring alcohol without her by his side, either.”

But it was also rightly read as a knock on women, especially in the workplace. You would literally never read that sentence with Pence talking about a man, and thusly, it is inferred that Mike Pence thinks of women as sexual objects first and humans second.

Contrary to vice presidential opinion, you can get dinner with a person and discuss everything on the planet and not be concerned you might be tempted to cheat on your spouse. That’s what normal, well-adjusted people do every single day.

Everyone had a lusty LOL at it—except for one man, who stepped to the vice president’s defense.

Seriously what's the appropriate reason for a married person to go out for a meal alone with a member of the other sex (outside of family)?

That’s Matt Walsh, blogger of the blog the Matt Walsh Blog, and author of The Unholy Trinity: Blocking the Left’s Assault on Life, Marriage, and Gender.

The obvious answer to his query is any reason. Work. Friendship. Love of food and conversation. But whether Walsh was earnestly looking for answers, he got them. In droves.

And they are great.

I'll probably get heat for this, but I don't even watch The Bachelorette with my wife and her friends. What if I temp them?

Does your wife know you can't be trusted not to fuck another woman right on top of the southwestern egg rolls at Chili's?

There is none! Women are temptresses and if you're alone will make you do sex to them. No other things good about women! Thx for getting it. https://t.co/dtzRGGM1ZJ

I saw this episode, don't worry it turns out she's a real estate agent and Chandler and Monica are moving to the suburbs https://t.co/NYrN4sKADW

not being physically able to consume an Applebee's 2-for-20 solo. https://t.co/QTyhC25ysn

It’s not often we need to invoke the slaughter rule on Twitter, but the score’s about 2,200-0 right now.