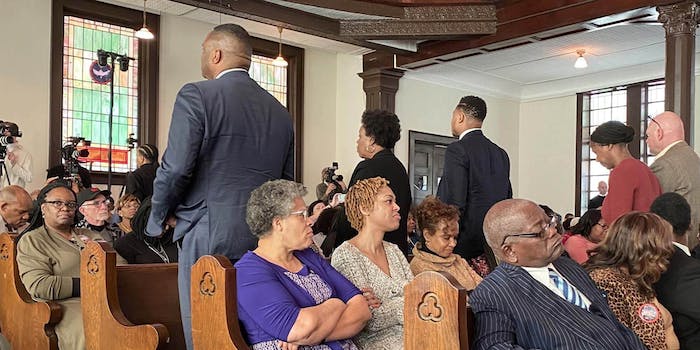 People turned their backs on Michael Bloomberg during his Selma speech

The billionaire was speaking in front of a historically Black church in Alabama.

Congregants at a church in Selma, Alabama on Sunday turned their backs on Democratic presidential candidate Michael Bloomberg.

The former New York City mayor was discussing civil rights at the Brown Chapel AME Church when around 10 members stood up and turned their backs to the billionaire.

The speech was being made on the 55th anniversary of what has been come to be known as “Bloody Sunday,” a day when white law enforcement officers attacked Black civil rights marchers at the Edmund Pettus Bridge.

While it remains unclear why the congregants turned their backs, Bloomberg has been widely criticized for his support of stop-and-frisk in New York City.

Although Bloomberg recently apologized for the policy, which was predominantly used against Black New Yorkers, many argued that the former mayor’s sudden reversal only came as a result of his presidential run. Bloomberg also spent years defending the policy after leaving office.

Fellow candidate and former Vice President Joe Biden also gave a speech at the church on Sunday but received a much warmer welcome.

The church’s pastor, Rev. Leodis Strong, has stated that Bloomberg initially brushed him off when offering the billionaire a chance to speak.

Strong says Bloomberg told him that he didn’t “have time to go to Brown Chapel” because defeating President Donald Trump in the 2020 election was a bigger priority.

Bloomberg’s team is said to have reached back out sometime later to the Selma church to accept the invitation.