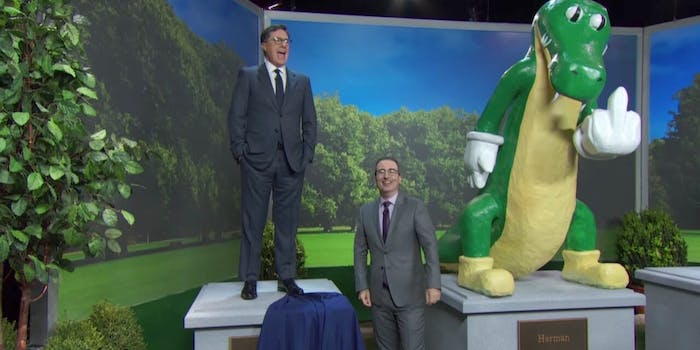 John Oliver has the perfect solution to replace Confederate monuments

He argues Americans need to reckon with the Confederacy's legacy.

After white supremacists returned to Charlottesville, Virginia, for a rally at a Robert E. Lee statue Saturday night, John Oliver took a close look at Confederate symbols and how Americans need to come to terms with the Confederacy’s legacy and take down those statues.

Symbols such as the Confederate flag and statues of prominent Confederate figures still stand today, as many argue that removing them would be erasing history. As Oliver pointed out, that’s already happening: The warring sides of the Civil War have been watered down to a “rivalry,” and most people don’t know that the South seceded because of slavery.

“That omits the key fact about the Civil War: the Confederacy was fighting for the preservation of slavery,” Oliver said. “And that’s not my opinion, that is just a fact.”

It’s a part of history that some people are loath to reckon with; Ben Affleck infamously asked Finding Your Roots host Henry Louis Gates Jr. to cut out the reveal that one of his ancestors owned slaves. But we need to come to grips with that history, Oliver explained, because people in America are still grappling with advantages and disadvantages that came out of the Civil War. Plus, the majority of Confederate statues went up during the height of Jim Crow laws to send a message to Black Americans. And once they’re removed, Oliver wants them placed in museums.

In at least one case, Oliver had a solution. Instead of having a Confederate statue in Charleston, South Carolina, he offered up South Carolina’s own Stephen Colbert to stand in and spout interesting facts at passersby. It wouldn’t work out with Colbert’s day job, but for a short while, it would be a more useful display.