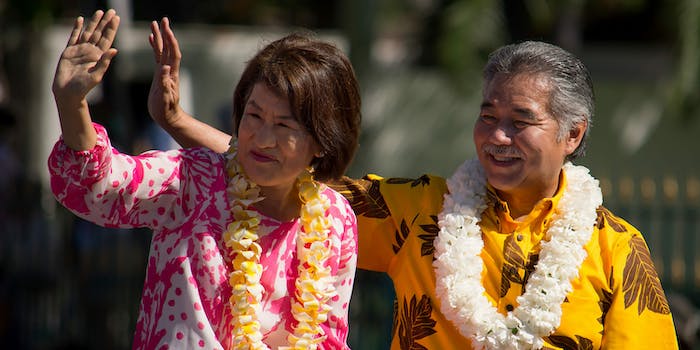 During the morning of Jan. 13, Hawaii residents and tourists spent an unnecessary and terrifying 37 minutes freaking out over a false missile alert. The crisis could have been calmed 17 minutes earlier if only Hawaii Gov. David Ige had not been an old fart.

According to the Honolulu Star-Advertiser, Ige said, “I have to confess that I don’t know my Twitter account log-ons and the passwords, so certainly that’s one of the changes that I’ve made. I’ve been putting that on my phone so that we can access the social media directly.”

Apparently, he not only forgot his password, but he didn’t have the app downloaded on his phone in the first place.

Some Twitter users are backing the governor up by pointing out there are other ways to communicate to the public in the event of an emergency. Ige has less than 8,000 followers on Twitter, compared to the number of residents in Hawaii which is approaching a million and a half. As of 2016, the population of persons 65 years and over made up 17.1 percent of the population. So perhaps his Twitter responsiveness didn’t matter to many in the first place.

When some called the governor “incompetent,” people came to his defense and admitted the same relatable truth that they don’t know their own passwords either.

However, these Twitter users aren’t in charge of the state of Hawaii, which makes the governor’s total lack of control over his social media disconcerting.

Ige joined Twitter in 2014 when he became governor. While he claimed in a tweet the day of the alert, “I am working to get to the bottom of this so we can prevent an error of this type in the future,” his Twitter bio still reads, “Updated by staff.” It is unclear how much control he has over his own account, although it is routine for staffers to tweet from a public figure’s account.

The false alarm, sent out by the Hawaii Emergency Management Agency, was originally caused by a single person who “clicked the wrong item on a computer drop-down menu.”  According to a former secretary of defense in an article by Politico, “it is clear that the state’s alert system is in need of some basic improvements.” But some people don’t think the system is to blame—they blame the elected officials’ lack of tech savvy.

Yeah we need to get younger people in govt