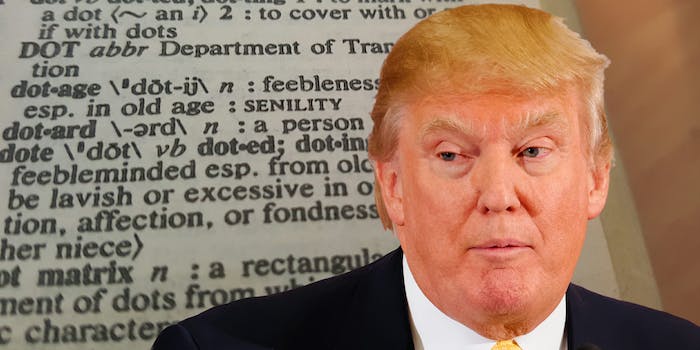 As Donald Trump and Kim Jong-un volley insults at each other across the Pacific, Merriam-Webster’s Twitter account dutifully stands by to translate for the rest of the world.

In response, searches for the latter term hit an instant high, and Merriam-Webster, already a trusted resource during tumultuous and confusing times, was there to meet demand. Though the dictionary frequently tweets trending terms and topics, rarely has it called search volume “high as a kite.”

Though “dotard” literally just refers to someone “in his or her dotage,” the term has everyone bickering over its true provenance.

Jokes aside, there is something of an etymological history to dig through here; Merriam-Webster notes the term’s original meaning was more in line with “imbecile” when it was introduced seven centuries ago.

America has collectively learned a new word regardless, but all this debate presumes that Kim Jong-un’s letter was accurately translated to English in the first place. One Twitter user suggests that a more accurate gloss of the insult hurled at Trump is “old beast lunatic,” which sounds like a little-known addition to the Wu-Tang Clan more than anything else.

Not since “covfefe” has the nation taken such a vested interest in lexicography. Maybe next, we can all race to learn to read Korean.