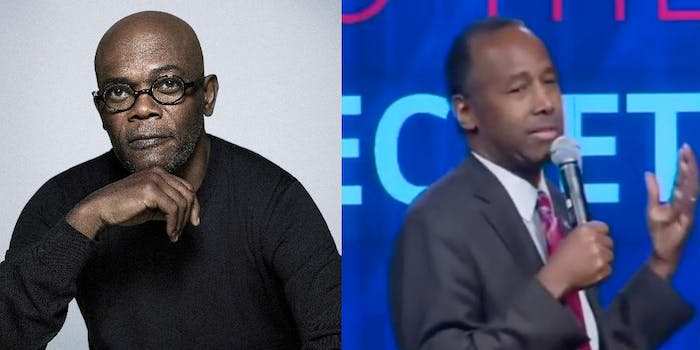 The HUD secretary likened slavery to immigration in his first official address.

In the Trump administration’s latest blunder on race, Carson suggested that the African slaves pulled from their families and sold into involuntary servitude had comparable dreams to those of early immigrants.

“That’s what America is about,” Carson said in the address, which was streamed live to the public and HUD’s regional offices.

While the reception at HUD was unremarkable, at least at the time, Carson’s gaffe sparked a flurry of outrage across social media.

Their dream? Not be kidnapped, tortured, raped, forced to mate, work for another's gain, torn from family + culture. pic.twitter.com/lvpqUMGE2w

Ben Carson obviously wrote too many mind-altering prescriptions for himself. #bencarson

Samuel L. Jackson delivered what felt like the final word on the matter.

Carson doubled down on his comments on the Sirius DM radio show of his business partner Armstrong Williams on Monday night, arguing that you can be an “involuntary immigrant,” which he defined as “a person who comes to live permanently in a foreign country.”

You can be an involuntary immigrant.. https://t.co/jH0W8SdzaJ

“Slaves didn’t just give up and die,” Carson added on Twitter. Of course, it’s impossible to determine how many enslaved Africans committed suicide to escape the horrors of slavery. Unless listed in a plantation owner’s account book or their will, slaves were rarely accounted for.

Carson posted a more conciliatory note on Facebook to close the evening. In it, he draws a clearer distinction between slavery and immigration. “The two experiences should never be intertwined, nor forgotten, as we demand the necessary progress towards an America that’s inclusive and provides access to equal opportunity for all,” he wrote.

Third time must be the charm.