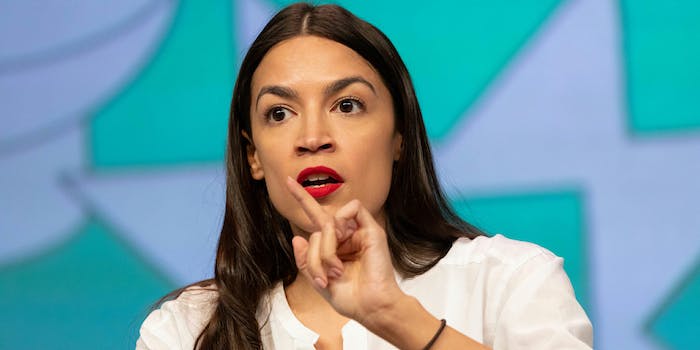 Rep. Alexandria Ocasio-Cortez (D-N.Y.) is joshing the Democratic National Committee for missing her class on how to use social media effectively, after the DNC sent out a tone-deaf tweet this week.

Remember that DNC tweet from a few days ago that tried to entice voters to download and use a picture of Donald Trump as their phone background? The one that quoted Beyonce?

This is a whole mood.

Text "Boy Bye" to 43367 to get this exclusive wallpaper. pic.twitter.com/reWksgbNEz

In January, the House Democratic Policy and Communications Committee alongside Ocasio-Cortez held a session on how to better connect with constituents via Twitter.

Now, the New York congresswoman joined in on dunking on the official Twitter account for the Democratic National Committee by saying that they clearly didn’t attend her Twitter class if this was the content they were working with.

Although AOC has often been considered a maverick, her and other progressives ⁠are still intrinsically linked to the Democratic Party.

For this reason, it’s somewhat of a bold move for Ocasio-Cortez to openly admonish the DNC’s official online presence. Ocasio-Cortez’s boldness online is no new development, however. She has hit back at innumerable critics online since garnering national attention and she’s handled it with aplomb.

As the congresswoman suggested, maybe the DNC should take a lesson from her Twitter tactics. Here are a few of her most endearing moments online.

Who could forget when the congresswoman replied to a creep shot that a writer shared of her while criticizing her clothes?

If I walked into Congress wearing a sack, they would laugh & take a picture of my backside.

If I walk in with my best sale-rack clothes, they laugh & take a picture of my backside.

Dark hates light – that’s why you tune it out.

Or when she let Fox News do her campaigning for her?

And after that forced dancing scandal, this response was pretty masterful.

Hell, she even uses Twitter to discuss the nuances of which Star Trek series and storylines are the best.