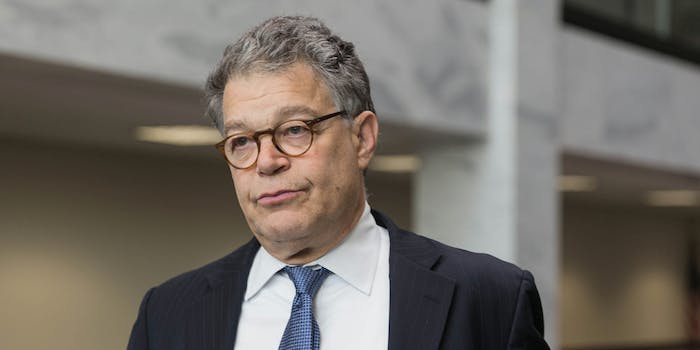 A morning news anchor in Los Angeles says Sen. Al Franken (D-Minn.) kissed and groped her without her consent in 2006 while he was headlining a show to entertain troops overseas.

In a post on 790 KABC, Leeann Tweeden said Franken, then a comedian, wrote a scene involving her and his character kissing, which he insisted needed to be rehearsed before the show. Despite her protests, Franken demanded, Tweeden wrote, and after agreeing to do it in order to have him “stop badgering me,” Franken “came at me, put his hand on the back of my head, mashed his lips against mine and aggressively stuck his tongue in my mouth.”

Tweeden said they were traveling back to Los Angeles and she fell asleep on a cargo plane in a flak vest and Kevlar helmet. When she later looked through photographs provided by a photographer, she saw a picture of Franken grabbing her chest while she was sleeping. The photo, which is embedded in Tweeden’s article, shows Franken smiling as he touches her breasts and poses for the camera.

“I couldn’t believe it. He groped me, without my consent, while I was asleep. I felt violated all over again. Embarrassed. Belittled. Humiliated,” Tweeden wrote, later adding: “You knew exactly what you were doing. You forcibly kissed me without my consent, grabbed my breasts while I was sleeping and had someone take a photo of you doing it, knowing I would see it later, and be ashamed.”

Shortly after Tweeden posted her accusation, Franken said he “shouldn’t have done” the photo but claims he remembered the rehearsal differently.

“I certainly don’t remember the rehearsal for the skit in the same way, but I send my sincerest apologies to Leeann,” Franken said in a statement provided to the Daily Beast. “As to the photo, it was clearly intended to be funny but wasn’t. I shouldn’t have done it”

Tweeden wrote that she decided to share her story after listening to Rep. Jackie Speier (D-Calif.) talk about being sexually assaulted when she was a congressional aide.

Update 12:30pm CT, Nov. 16: In a second statement issued on Thursday, Franken further apologized to Tweeden and others.

“I respect women,” Franken said in a statement. “I don’t respect men who don’t. And the fact that my own actions have given people a good reason to doubt that makes me feel ashamed.”

Franken said there was “no excuse” for him to take the picture and called it “completely inappropriate.” Franken also repeated that he does not remember the rehearsal for the skit “as Leeann does.”

Franken said he would cooperate with an ethics investigation into his behavior.