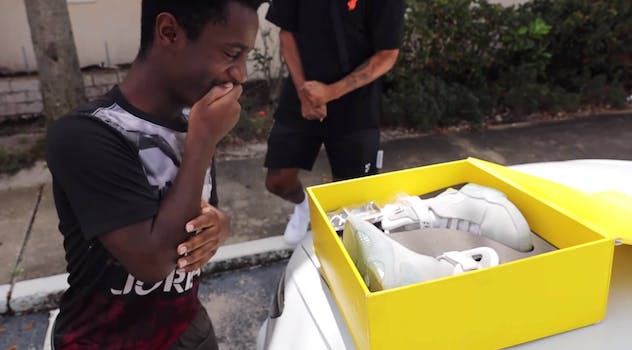 Prettyboyfredo tried to gift a bullied teen some $30,000 Nikes at school—he got detained

This one has a happy ending.

YouTuber Alfredo Villa—better known online as Prettyboyfredo—was detained this week after visiting a school to gift a new pair of shoes to a bullied teen.

The YouTube personality, known mostly for his prank videos, vlogs, and challenges, has been mentoring the teen, Jay, for some time. After hearing that Jay was being bullied over his size and clothing at school, Villa decided to plan a surprise. He purchased a pair of Nike Mags, normally worth $30,000, and headed over to Jay’s school.

Unfortunately, Villa didn’t tell anyone he was stopping by. When he got there, security assumed he was trespassing and detained him. Videos of the 26-year-old YouTuber in cuffs have been circulating ever since.

Villa and his crew weren’t detained for long. Once police learned of the good-natured intent behind Villa’s accidental trespassing, he was released.

Villa did eventually manage to get the shoes to Jay. There are only around 16,000 pairs of them in existence, and Jay is now among the exclusive owners. Considering the same shoes were featured in Back to the Future Part II, it’s a cool club to be part of. Villa managed to purchase Jay’s pair for a meager $15,000, despite a typical asking price of between $30,000 and $70,000, according to Dexerto.

Villa told Complex he hopes the shoes will give Jay a confidence boost. “As a kid, I grew up in very tough circumstances, from being in foster care to being bullied myself,” he said. “So I know what it feels like to practically have nothing. I could relate to his pain from my past experience, and I knew giving him something special like the Mags would give him the confidence to push forward and through the bullying.”

In an Instagram post memorializing the moment, Villa said he was thrilled to help Jay through this “hard time.”

“I hope that this gives you the confidence you need in order to push through,” he wrote. “You a real one Jay!”