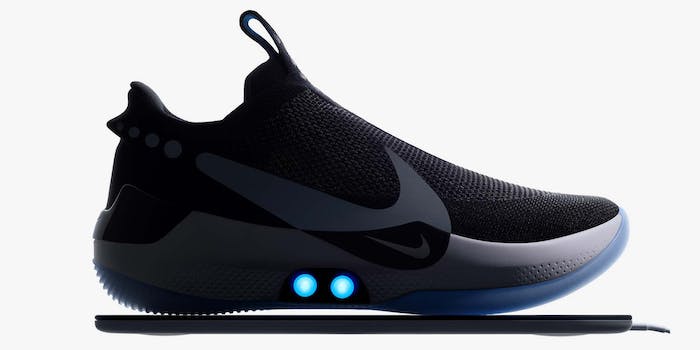 The highly-anticipated kicks are starting off on the wrong foot.

Nike’s recently released smart sneakers have already begun to malfunction thanks to a faulty update to the shoes’ app, the Verge reports.

Just days after their Feb. 17 release, the $350, self-lacing Adapt BB sneakers are causing issues for countless users, according to reviews on both Google Play and the Apple App Store. According to the Verge, some issues are cropping up due to outdated software in recent sneaker shipments.

Although the app should allow users to remotely tighten and loosen their sneakers, customers are reporting that their smartphones are not syncing with either the left or right shoe.

“App will only sync with left shoe and then fail every time,” one reviewer said. “Also, app says left shoe is already connected to another device whenever I try to reinstall and start over.”

While some users have reported success in carrying out a hard reset of their shoes, others report that the motors in their sneakers have stopped working entirely.

“It’s pretty sad paying $350.00 for something that doesn’t work properly,” another reviewer wrote. “Hope Nike fixes this fast and sends out something to correct it.”

Despite the issue, many others gave glowing reviews and reported no issues. Nike’s app is currently rated at 3.2 stars out of 5 on Google Play, while iOS users have given the app 4.3 stars.

Eric Avar, Nike’s creative director, said last month that the smart functionality aimed to give basketball players an edge by allowing them to quickly adjust their shoes when needed.

“During a normal basketball game, the athlete’s foot changes and the ability to quickly change your fit by loosening your shoe to increase blood flow and then tighten again for performance is a key element that we believe will improve the athlete’s experience,” Avar said.

Nike did not respond to the Daily Dot’s request for comment.