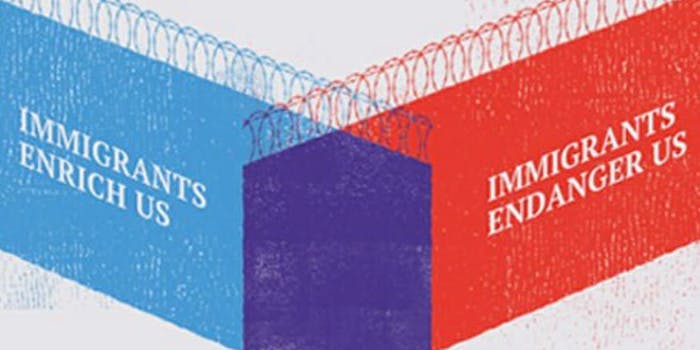 Not every issue has a middle ground.

Both Democrats and Republicans could stand to be a little more collaborative, is the message Yahoo News attempted to express in new ads for its app. But the company may now regret exactly which issues it chose to illustrate a middle ground on.

A recent advertisement shows a blue wall and red wall—both with barbed wire—intersecting to indicate two viewpoints. One wall reads “Immigrants Enrich Us,” and the other says “Immigrants Endanger Us.” The walls come together to make purple. “See all sides,” the copy says.

The ad didn’t blow over too well. Several Twitter users called out the false equivalence it suggested, explaining that one side is based in fact and the other in fear. “@YahooNews perched right in the intersect of freedom and fascism,” one user wrote.

Hey @YahooNews, this isn't a "side" to the issue b/c there's no evidence that immigrants cause crimes at higher rates than others. In fact, they're more likely to be the victim of a crime. Stop legitimizing "sides" of an issue that are based in fear & bigotry rather than reality

This is a visualization of what it looks like when someone tries to be unbiased and noncontroversial on issues that require a position be taken. Centrists would have you believe there is a middle ground in every debate. That position is nihilism masquerading as journalism. @greta

@YahooNews perched right in the intersect of freedom and fascism.https://t.co/O0RWQkzQ8S

Other users began making their own versions, pitting viewpoints like “Genocide is bad” versus “Genocide is not bad” against each other to highlight how ridiculous it is to insist there’s a middle ground for every issue.

Hey @YahooNews, do you need someone to help curate your app because I think I've got the hang of this. pic.twitter.com/AisCMmnGGu

“Yahoo News has a long history as a non-partisan news organization, with a mission to present divergent perspectives,” a Yahoo News spokesperson told BuzzFeed News after the pushback. The ads were intended to “reflect the current state of our country, and the polarizing conversations taking place on a number of issues.”