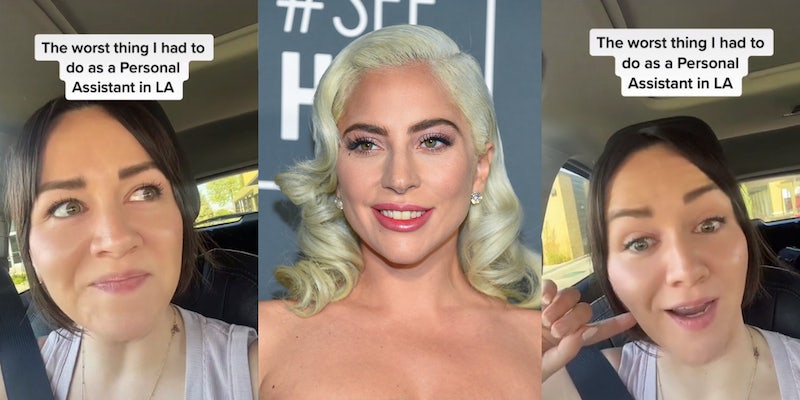 ‘I cannot believe it worked’: TikToker shares ‘the worst thing’ she had to do as a personal assistant in Los Angeles

'I know you said there's nothing available, but he's friends with Lady Gaga.'

A TikToker shares her experience scheduling a medical appointment for a client that made her “want to leave the state” when she worked as a personal assistant in Los Angeles in a now-viral TikTok.

In the video posted by TikToker Sadielane (@_sadielane) on July 22, she explains her “least favorite thing” that she was asked to do as a personal assistant.

“He asked me to make an appointment for him with this really high-end, in-demand specialist. It was not an emergency, he just wants to see this person,” she says in the clip. “It’s the end of the year, it’s the holidays. The schedule is packed.”

Sadielane continues that the office told her the soonest her client could be seen was the end of January, to which he requested that she call back to inform the staff that he was “friends with Lady Gaga” in an attempt to get a sooner appointment.

“I called the office back, and I was like, ‘Hey, it’s me again. I’m calling for the same person. I know you said there’s nothing available, but he’s friends with Lady Gaga,'” she says. “The lady is like, ‘Can I put you on hold?’ She pops back on and says, ‘Yeah, we can see him Friday morning.'”

“Money can’t buy you love, but in this country, it can damn sure buy you healthcare,” Sadielane adds at the end of the clip.

The video has reached over 699,000 views as of July 27, with commenters astonished that name-dropping Lady Gaga worked to secure her difficult client an earlier appointment.

“IT MAKES ME ANGRIER THAT THEY APPROVED IT,” one user said.

“What?! I’m a Nurse and I’ve had so many people try to do the “do you know who I am” thing to me… I’m stunned that this actually worked!!” another wrote.

Others speculated that “Lady Gaga” was a “code” at the exclusive medical practice.

“I wonder if “I’m friends with Lady Gaga” was a code for something else! Lol,” a commenter wondered.

“That was a code at that office,” another said.

In an Instagram direct message to the Daily Dot, Sadielane clarified that “Lady Gaga 100% wasn’t” a code.

“I knew from working with this person that it was entirely a name drop. I don’t know if Lady Gaga has a relationship with the office,” she wrote. “It wasn’t code for drugs or anything like that. I guess people like to imagine it’s creepier, but I think it’s pretty cringey on its own.”