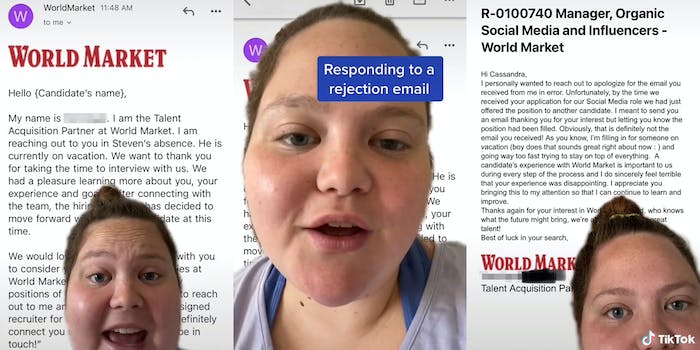 ‘Couldn’t even be bothered to put my name in’: TikToker responds to typo-riddled World Market job rejection email

'Proofreading is one of the skills I can bring to the team if you decide to move forward with an interview.'

In a viral video, a woman on TikTok shares a less-than-ideal job rejection email she received after applying to World Market. The email thanked her for her interview—despite the fact that she never interviewed for the position.

“I’ve been applying for jobs, and this has got to be the most annoying rejection email I’ve gotten,” user Cass (@casslarra) says.

While showing a screenshot of the email, Cass reads it aloud and notes the aspects that bothered her. First, the World Market employee forgot to fill her name into the template.

“Hello, (candidate’s name),” she reads. “Couldn’t even be bothered to put my name in.”

The email then thanked Cass for interviewing, but she was never interviewed for the position. “We want to thank you for taking the time to interview with us. We had a pleasure learning more about you, your experience, and goals,” the email reads.

“I never interviewed with them and aside from the fact they used the wrong macro-ed email to respond and just got super lazy, they also didn’t put my name in the subject line,” Cass adds.

Furthermore, Cass wrote a “passive-aggressive” email back to the company, pointing out the issues about the previous email.

“While I can appreciate the email, I would like to point out that I was never interviewed for the position and nobody ever met with me,” she wrote in the email.

Cass then noted in the email that if the role still had yet to be filled, she would be open to an interview.

“In the very least, moving forward, my name is Cassandra—not (candidate’s name),” she concluded. “Proofreading is one of the skills I can bring to the team if you decide to move forward with an interview.”

The World Market employee who sent the rejection email apologized for her error, Cass shares in a follow-up video. By the time they had received the TikToker’s application, the position had been filled, the employee explained in the email, and she meant to send a different email to Cass.

With a co-worker out-of-office on vacation, the employee noted that she’s been juggling more than usual—and the mistaken email was a result of that.

“Lowkey though, I get it, girl,” Cass sympathizes in the follow-up video. “You’ve been going through it, and I apologize. You deserve a vacation, and you should take one after he gets back.”

In the comments of Cass’ initial video, viewers supported her “snarky” response to the rejection email.

“First half was very professional actually. Second half was savage and I’m living for it,” one user wrote.

“I work in talent acquisition and I think your response is both hilarious and warranted,” another added.

“That’s not a team you want to work for if they can’t even take the time to get minor details right,” a third wrote.

However, following Cass’ update video, many commented on the World Market employee’s honesty and transparency.

“Proof that transparency and honesty can change an experience,” one person wrote.

“She sounds sweet, so nice that she owned up. We’ve all been there,” another empathized.

Some even mentioned the potential for Cass to be hired if a position opens up.

“I mean you at least made an impression for sure! I bet she’ll always be on the lookout for your resume in the future,” one user said.

“Well now they have to hire u when there’s a position,” another concurred.