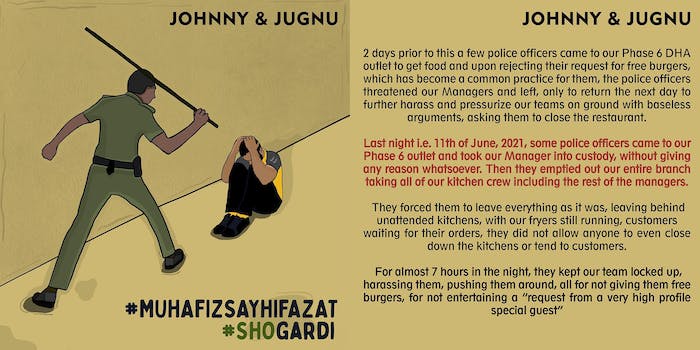 The workers allegedly weren’t allowed to shut off kitchen equipment prior to being taken away.

The entire working staff of a restaurant in Pakistan was detained after allegedly refusing to give police officers free food.

Workers at Johnny & Jugnu in Lahore reportedly say that officers came into the restaurant on June 10 to ask for free burgers, “which has become a common practice for them.” When their request was denied, they allegedly “threatened” the managers and ultimately returned the following day with accusations that the restaurant wasn’t following proper coronavirus protocols.

According to the restaurant’s Facebook page, on June 11, police “took our Manager into custody, without giving any reason whatsoever.”

“Then they emptied out our entire branch taking all of our kitchen crew including the rest of the managers,” the post reads. It also claims that not only were customers left waiting on orders but that the workers weren’t allowed to shut off kitchen equipment prior to being taken away.

All 19 workers were reportedly detained for seven hours, and Johnny & Jugnu’s chief executive, Gohar Iqbal, said that when he stood outside the station asking why his employees were in custody, he was told by police that they had been disrespectful and denied officers free burgers.

Although the specific incident took place in Pakistan, it has garnered attention from all over the world, with people in a variety of countries expressing no shock whatsoever that police might behave in such an entitled manner.

“Here in my city (Rio de Janeiro, Brazil) the police get EVERYTHING food and drinks related for free,” wrote Redditor u/PedroVey. “Even if it’s a private business they play the ‘it’s been a hard day at work protecting and serving’ card and they get free food, no matter how expensive.”

Another user wrote that “we’re only one step away from it being illegal to not give cops free shit so I will refrain from any sassy comments.”

Iqbal told the New York Times that he was “stunned” by the response their plight received both within Pakistan and around the world.

“Within hours, the customers spread the word, with many messaging that they had spoken to higher authorities on our behalf,” he said.

Provincial Police Chief Inam Ghani reportedly said he suspended all nine officers who were involved in the incident.

“Officers and personnel involved in illegal activities do not deserve any concession,” he said.