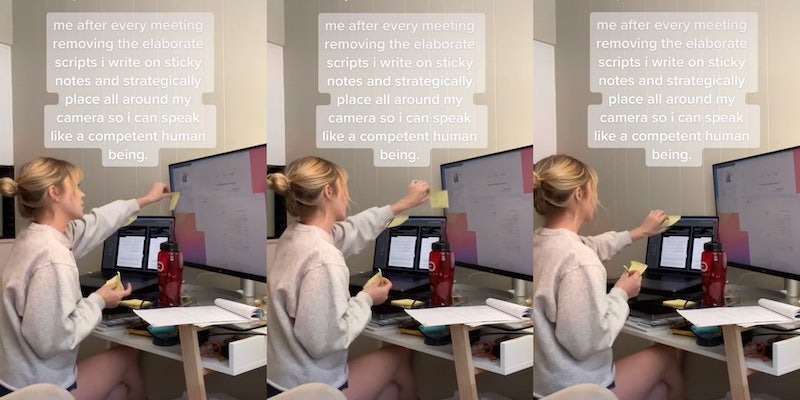 ‘This is me, every single meeting’: Workers are using ‘meeting scripts’ to get their ideas across on work calls

'I thought I was the only one with sticky notes drowning my computer.'

With the rise in remote work, speaking up during work meetings can be a daunting task, but a TikToker seems to have found a workaround: writing scripts on notes and sticking them to her computer.

A video from user Lizzie (@casseroleshanty) went viral after it sparked a discussion on using scripts, notes, and other workarounds to cope with your social anxiety and ADHD during work meetings.

The video was posted on the 20th of July and currently has over 150,000 views. It shows Lizzie taking sticky notes off her computer screens with the caption, “me after every meeting removing the elaborate scripts I write on sticky notes and strategically place all around my camera so I can speak like a competent human being.”

Many found the unusual ritual relatable and went to the comment section to share similar tactics they use to stay on track during meetings.

“I use the sticky notes app, make it transparent and place it over my video call so I’m “looking” right at them,” one commenter said.

Another commenter agreed: “Writing scripts has helped me so much with my social anxiety and has boosted my confidence in meetings. No script = I’m staying muted.”

According to Mental Health America, fifteen million, or seven percent, of American adults struggle with social anxiety. In a blog on combatting workplace anxiety, practicing leading meetings and speaking up is suggested as a way to get more comfortable presenting among your peers.

A third said, “Lmao I thought I was the only one with sticky notes drowning my computer.”

“This is me, every single meeting,” another commenter shared.

Someone else explained their strategy: “3 screens my anxious queens – 1 screen for OneNote script(s), middle screen for sharing, right screen for teams messaging.”

The Daily Dot has reached out to @casseroleshanty via TikTok comment.