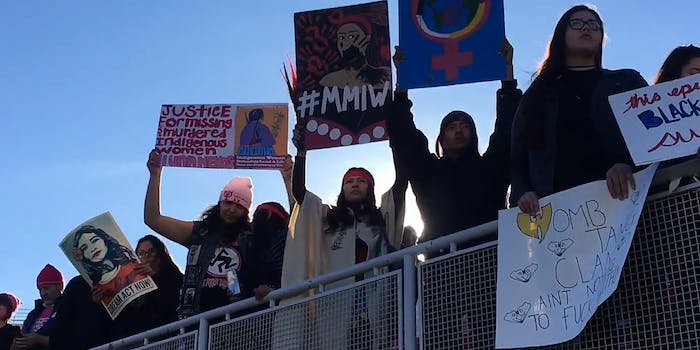 This year is all about getting more Dems, women, and people of color in office.

At the Women’s March in New York City this year, there were fewer signs about uteruses. Instead, there were posters that explained trans women are women, and Black bodies are to be respected. There were teens and families with young children who held signs for “boys to be decent humans” and for the president to stop acting like a “shithole.” There were chants calling for a clean DREAM Act and the renewal of children’s healthcare program CHIP, a reminder we were just a handful of hours into a government shutdown.

In the streets of midtown Manhattan, the march was less about a general fight for “women’s rights” and more about the understanding that we all have to work together for everyone to have a voice in this country.

While NYC’s diversity and perspectives have never been a realistic snapshot of the rest of the country’s, the 2018 Women’s Marches, which took place in over 250 cities this weekend, followed a similar theme: In Portland, there were at least four different events to give various causes their own spaces, including one to center indigenous womxn; in more rural and conservative areas, you could even find signs for LGBTQ rights and #TimesUp.

You could say the Women’s Marches of 2018 were both more focused where it mattered (pushing specific community issues) and broader where it was absolutely necessary (in its embrace of various marginalized people and issues). If Saturday was a day to remind the country that we, the historically unheard and underrepresented, are not going anywhere, then the rest of the year—a midterm year, no less—is about harnessing that energy to effect the most change and getting the right people in office.

On Sunday, the national Women’s March organizers held a Power to the Polls rally in Las Vegas, picking the location because of its status as a swing-state and as home to the deadliest mass shooting in modern history. Like the signs on display in NYC, the idea behind the rally was to make the push for change in the 2018 elections an intersectional affair. In fact, the woman who coined the term “intersectionality,” Dr. Kimberlé Williams Crenshaw, even spoke, along with Black Lives Matter co-founder Alicia Garza, trans activist Ashlee Marie Preston, and the first Latina elected to the U.S. Senate, Sen. Catherine Cortez Masto (D-Nev.). The underlying idea was to encourage progressive white women to not only show up for abortion rights but for the battles regarding immigration, low-wage labor, and police brutality, among others—and then take that fiery spirit to the polls.

“Stand up for me, white women. Come to my aid,” national Women’s March co-president Tamika Mallory said in her speech on Sunday. “You say you want to be my friend? I don’t want to hear it from your mouth. I want to see it when you go to the polls at the midterm elections.”

Fellow co-president Bob Bland and Planned Parenthood president Cecile Richards, both white women, also conveyed the message that we can’t stand idly by and let Black women voters do all the work, like they did in Alabama to elect Doug Jones to the Senate over alleged predator Roy Moore.

“I’m speaking specifically to white ladies here,” Bland said. “We need to bring our voice and our vote, not just for ourselves, not just for the issues that directly impact us and our families. But for the issues of all marginalized communities. We must vote for the Dreamers. We must vote for indigenous women who are missing and murdered in alarming numbers. We must do it for trans women of color. For sex workers. For all of our Black and brown communities.”

The good news is that women already showed that they want to and can elect women—yes, trans women and women of color, too—into office in 2017. Charlotte, North Carolina, got its first Black woman for mayor in November; Virginia got its first two Latinx women and a trans woman elected to its state legislature—all beating out incumbent Republicans.

The 2018 midterms are already packed with a record number of women running for office, thanks to initiatives like Emily’s List, which saw a spike in women interested in running for office after the 2016 election. At the moment, 390 women are planning to run for the U.S. House of Representatives and 49 women for the U.S. Senate—which is 68 percent higher than the number of women who ran for a Senate seat by this time in 2014. Then there are the women, Republican and Democrat, white and of color, running for city and state offices and in gubernatorial races across the U.S. (Rep. Stacy Abrams, who’s running for governor of Georgia against another Black woman, is a particular candidate to watch.)

So how is the Power to the Polls initiative planning to help these women win? By targeting swing states to register new voters, creating forums about issues that impact given communities, and working to eliminate voter suppression.

These aren’t impossible feats considering that progress has already been made in making women if not more politically active, at least more politically minded when it comes to voting in their best interests. A poll released today by the Washington Post and ABC News finds Democrats holding a 57 percent to 31 percent advantage among female voters, which is double Hillary Clinton’s margin in the 2016 election. White women have indeed turned a corner, too: They favor Democrats by 12 points right now; in 2016, they favored Trump by nine.

While things look promising for a blue wave to come crashing down on American politics this year, if 2016 taught us anything, it’s never to feel comfortable. If you’re not sure where to begin in the fight, you can start by donating to the Power of the Polls initiative. Another less-expensive step is to engage white women—friends, family, members of our community—in this discussion.

“Women have beaten the odds to elect our own to office, and these victories were led and made possible by women of color,” Planned Parenthood’s Richards told the crowd on Sunday. “So, white women, listen up: We’ve got to do better.”