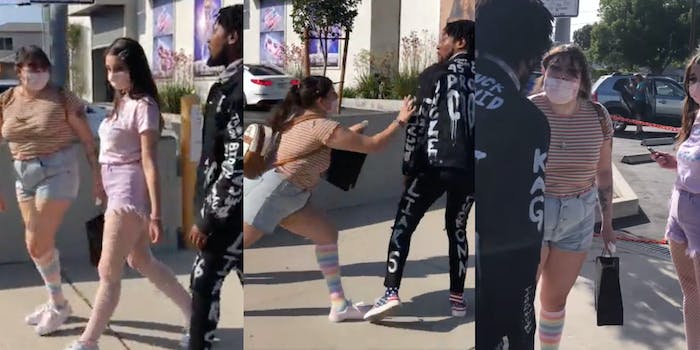 ‘How dare they get harassed’: 2 women pull knife and shove man on the street who won’t leave them alone

'They didn't start this altercation.'

A pair of Burbank, California women were arrested on May 22 after a verbal altercation escalated and one woman pulled a knife. The incident began after a man followed them down the street, hurling insults and refusing to back away.

A video of the incident went viral on Reddit yesterday. It begins with the two masked women, identified as 21-year-old Miranda Marinch and 26-year-old Melissa Gutirerrez by My Burbank, walking down the sidewalk. They are then approached by a man who has cropped up at several area protests, recognizable by his unique jacket. The man was identified as “Fred” by a bystander.

Fred shouts insults at the women, keeping pace and standing close to them. He calls the women “stupid as shit” and “ho” several times before the older Gutirerrez steps in and tells him, “Get the fuck away from us.” When he refuses, she steps forward and shoves the man away from Marinch. When Marinch starts digging in her purse, Fred seems to recognize the danger the women may pose and starts to walk away. The women continue to approach him, Marinch rifling around in her purse until she produces a small pocketknife.

Gutirerrez insists that they are “no one to fuck with,” as her friend holds the knife awkwardly in one hand, pointed away from the man. Rather than continue to retreat, Fred stops and mockingly asks if the women are “feminists,” to which Gutirerrez asks if he is “a menimist” before telling him that he sounds like “a bitch.” She then insists again that Fred step away from the pair, shoving him back a second time.

In the background, the person filming—presumably Armen Rezz—tells someone else to “call the cops” because “she assaulted him.”

Fred continues to refuse to leave the women be. He spews insults, which can barely be heard over the women telling him to “just leave” and insisting that “You’re the one that came up to us.” He, meanwhile, calls them “dumb as fuck,” and “stupid-ass hoes.” When the women tell him he should really be wearing a mask, he takes a turn for the infantile, telling them they should “wear these nuts,” aggressively thrusting toward the duo.

The argument dissolves into incomprehensible shouting past this point. More insults sprinkle the argument before the women turn to walk away, thankfully unaccompanied by any strange men.

A longer version of the video on the Rezz TV YouTube page sees the women walking past what appears to be a pro-Trump kiosk. Flags with Trump’s name are prominently displayed, along with signs claiming that “Biden stole the election, Hillary belongs in prison, Epstein didn’t kill himself, Climate change is a hoax, and all lives matter.”

The kiosk was set up as part of a protest in support of Tinhorn Flats, a business that refused to comply with lockdown orders.

As they pass, one of the women notes that “Trump lost, get over it.” This appears to be the motivation behind Fred’s refusal to leave the women be. The remainder of the video is identical to the one on Reddit.

A bystander who wished to remain anonymous noted that onlookers were surprised to learn that the women had been booked over the incident.

“A lot of us were actually surprised that the girls were booked,” they said. “The video is obvious. Fred really egged them on. Looking at the video it’s obvious he started the whole thing, he instigated it. So we were really surprised that the girls got treated the way they did by the police. I don’t know the laws, maybe they did break laws or whatever, but it wouldn’t have happened unless Fred was kind of harassing them. Honestly, I don’t blame the girls, I feel bad. What else were they supposed to do?”

The man who was filming, Rezz, was the one to call for police to be phoned, according to the bystander. Onlookers were concerned that the situation may escalate further. Police were provided a copy of the video posted to Rezz TV following the incident.

Commenters on Reddit were likewise aghast that, despite the man’s harassment, the women were the ones to get in trouble.

“Denying the right to defend oneself, punishing someone for defending themselves, seems downright evil to me,” one commenter noted. Another added: “How dare they get harassed.”

Another viewer pointed out that “they didn’t start this altercation.” They also couldn’t help but note that it’s “kinda soft to call the cops bc you got rejected and creeped some girls out.”

An argument over who was in the right is ongoing, as some people note that the man was backing away by the time Marinch pulled the knife. Others noted that the man “displayed all the body language of an impending attack, they had every right to react with any force they felt necessary in that moment.”

After someone linked the full video, many viewers lost any empathy they may have held for the man.

Marinch and Gutirerrez were arrested around 5:27pm, according to My Burbank. Marinch was booked for “exhibiting a deadly weapon,” and Guturerrez was booked for “battery.” Both women were later released on a promise to appear at a later court date.

Update 9:28am CT, June 10: This story has been updated with comments from a bystander who wished to remain anonymous.