I have zero regrets.

So, I’m standing on the subway platform writing this, and a homeboy of mine who was blogging before that even became a respected profession walks up and smiling says, “Well you’re having a good week!”

When you spend so much of your day online that your eyes water when you look at the Candy Crush screen, you know that going “viral” is a major big deal. Like, MAJOR. Why? Because “the Web” is short for “The WORLDWIDE Web.” It’s a global platform. And going viral is like Santa flying around the world and in one fell swoop dropping you in a bunch of people’s consciousness that didn’t even know they wanted you.

It’s not an easy feat. It is a phenomenon that can change someone’s life for the good or the bad depending on the content.

In this case, it’s for the good.

I didn’t go viral because my boob popped out unexpectedly while on stage, or because I failed miserably at a cinnamon challenge. No, I went viral standing up for something I believe in on a national platform. And even better, the video going viral didn’t just bring attention to us in it, it empowered those watching it. 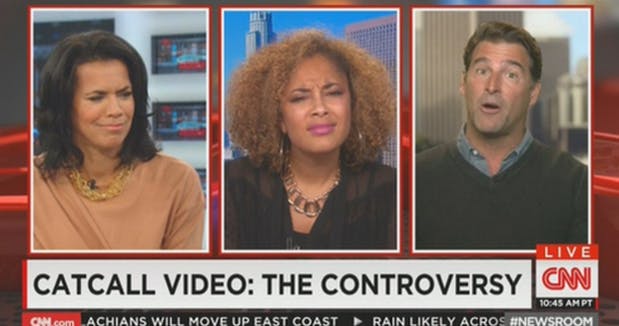 That’s me right there in the middle. 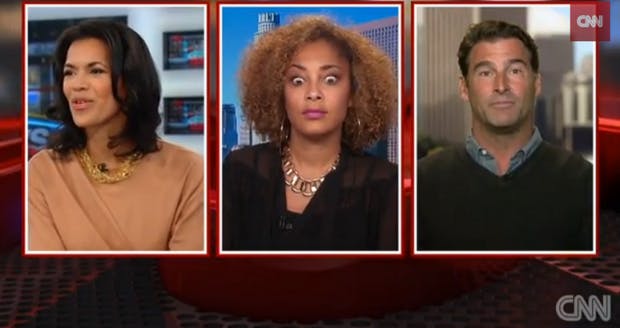 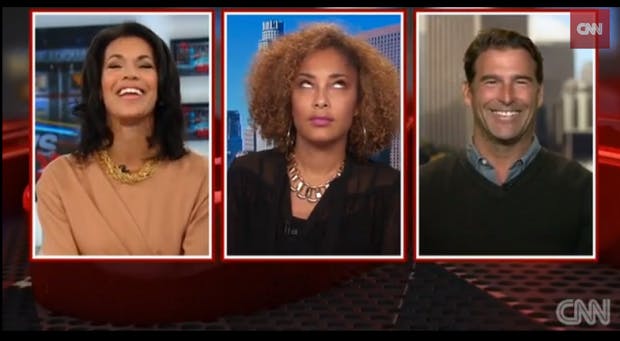 I’m at the center of the viral mansplaining video. No, really. I’m literally the woman in the middle of the screen on the now virally famous debate on Fredricka Whitfield’s Saturday morning show on CNN between myself and author and self-proclaimed “bad boy” Steve Santagari. 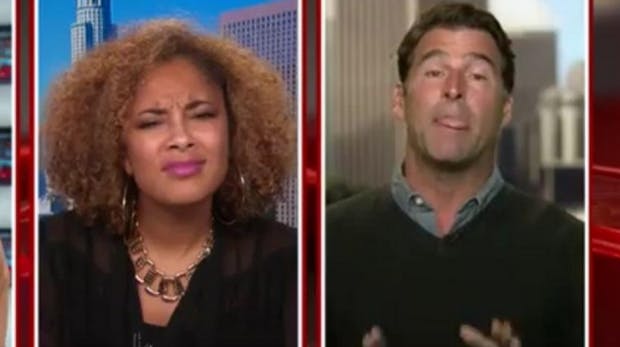 I am the one with all the faces and all the side-eyes and all the eye rolls. Faces contorted into completely genuine reactions to my fellow guest’s emphatic defense of behavior that daily imposes upon the serenity and vulnerability of myself and women the world over. 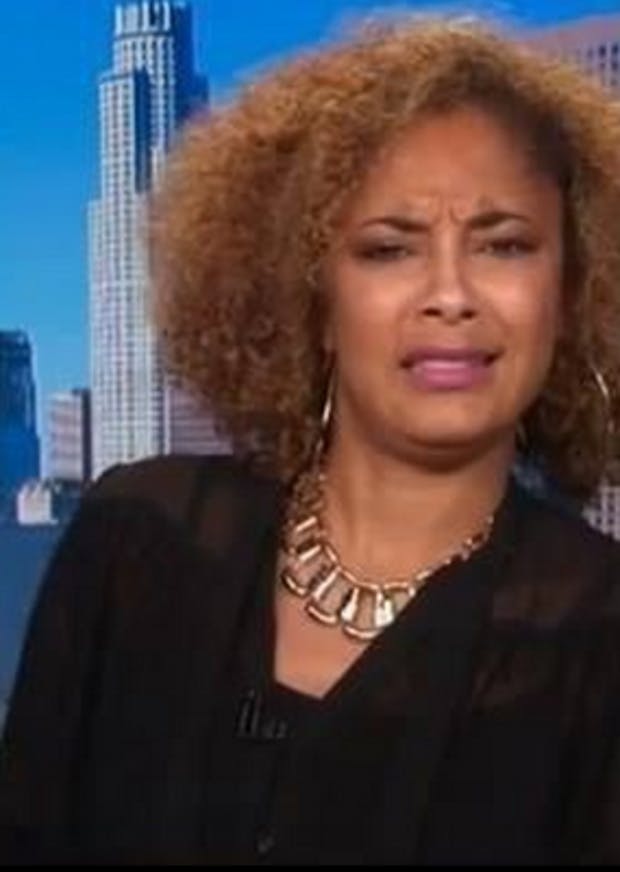 Side-eyes that cut into the patriarchal BS that empowered this privileged middle-class white man to assert on national television that he knows how women think. And eye rolls that were authentic responses to the seemingly endless putrid sexist drivel oozing through my earpiece as he rattled off statements like, “Carry a gun” and “There’s nothing more that a woman wants to hear than how pretty she is.”

Listen, I don’t know this guy from Adam. All I know is he’s written some books I would never read and that he clearly thinks this issue is a joke. However, he learned two things, that not only is it far from a joke, but also that you should always Google your fellow guests. I didn’t come to laugh or cradle his wildly off base sentiments on this issue for the sake of TV. No sir. This situation that he and many others minimalize as just a video or some “innocent catcalling” is actually a REAL thing, that women REALLY deal with and that many of us REALLY want to eventually see stop!

I deal with the aggressive imposition of men on my movements on the daily. Living in New York it’s par for the course. And for whatever reason, the white men were edited out of the video produced by Hollaback that sparked this debate. However, they do it, too. Yeah, unfortunately the sentiment that women should always be gracious and responsive when addressed by a man is not race or class specific. I mentioned in the interview that I have a 15-minute stand up comedy set on my dealings with street harassment.

It always gets laughs, no matter where I do it, because all women can relate to it and all men know at least one person who is probably somewhere doing it right now. “I see you ma!” SMH. 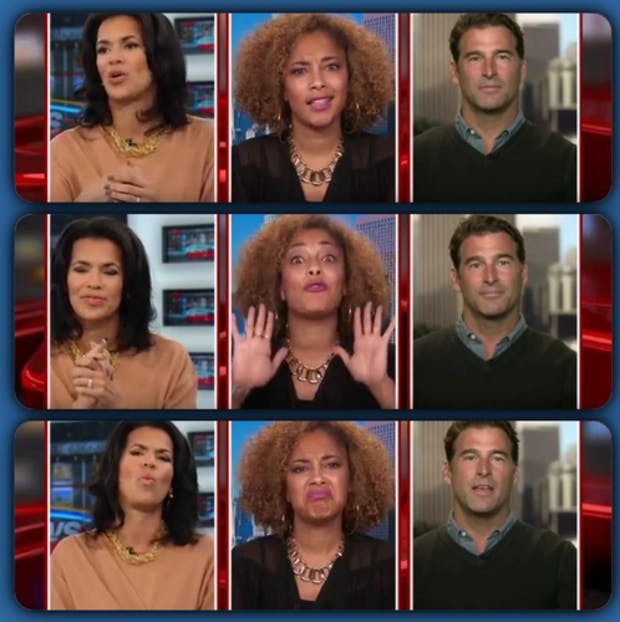 The cornerstone of my comedy is to make people laugh and examine social issues with the goal of improvement. Change doesn’t happen overnight. We all know this. There is a dialogue that needs to continue amongst both men and women on how to improve how we interact with each other in this day and age. What this video going viral did is it opened up that conversation to the heart of the issue: “Why do men still feel that women are to be the proud receptors of their advances/greetings/compliments at all times?”

It’s not because of etiquette. It’s not because of civility. No. At the core it’s because even with our voting rights and careers, women are still heavily marginalized and suppressed in many ways. Some more overt like health/abortion policies, equal pay, and the handling of sexual assault cases and others in everyday instances like, being told “You know a lot about ____________ for a woman,” being asked, “Is your husband or a decision maker there” (a customer service person asked my mom that the other day when she called to schedule some work done on her house) and of course being catcalled.

These everyday occurrences may seem banal or minor nuisances to some but they are attached to an underlying thread of thinking—“Women aren’t equal”—that creeps like a ground wire throughout all facets of our society.

Well, we are. Sure, we’re different, yet we are equal.

I don’t even want to take up words listing the innumerable ways women are awesome because we all know. No, I’d rather use these words to address all of you who made this discussion go viral because you believe in women’s safety, in gender equality/civility, in masterclass level side-eyes given, and in your rights as an individual not as they relate to the patriarchal status quo. People have been tweeting and emailing me messages like, “You’re a hero,” “You’re an icon,” “Thank you for speaking out,” and “AMANDA FOR PRESIDENT!” Colleges have reached out to book my lecture “Sideye Seminar: Identifying, Challenging, and Ending Everyday Sexism.” It’s been quite a crazy experience and I cannot thank you enough for the love.

It has been overwhelmingly amazing to receive so much encouragement and support for simply standing up for what I believe in and not letting ignorance get the upper hand, even if it is only for a 7-minute convo on a news channel on a Sunday morning.

Hopefully more folks will watch the vid and understand my point that the bigger picture here is it’s not just about catcalling women.

It’s about RESPECTING us.

As a few of the comments I’ve received on Instagram, Facebook, and Twitter have shown, there are still many on the wrong side of that debate. However, the fight continues, because over here, on this side, we’ve got a squad of strong, powerful, inspired people that this week made a woman go viral for being smart, strong, and funny.

If that ain’t feminism doin the damn thang I don’t know what is.