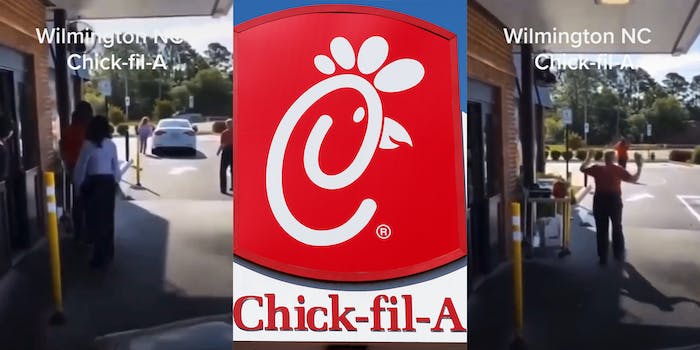 “Karma stepped in and really said ‘my pleasure'”: Woman gets out of car to allegedly argue with Chick-fil-A worker in drive-thru—but she leaves car in drive

'Car was so embarrassed it dipped.'

A video showing an alleged drive-thru argument gone wrong went viral this week after it was posted to TikTok.

The video, posted by user @southernspice82, shows dashcam footage of a woman outside of her car in the drive-thru of a Wilmington, North Carolina Chick-fil-A. The woman’s car continues moving, eventually nosediving into a nearby ditch.

“She stepped out her car to argue with an employee and left car in drive … Thankfully nobody was hurt,” the caption of the video reads.

The video currently has over 2.9 million views and inspired a follow-up.

@southernspice82 She stepped out her car to argue with an employee and left car in drive 🤦🏼‍♀️ Thankfully nobody was hurt. #fyp ♬ original sound – user5711947184109

According to the TikToker’s follow-up, the employees originally expressed concern for the people in the car as the woman appeared to be “nodding out.”

In a comment, @southernspice82 said that “[the woman] got out [of the] car to argue with the employee after said employee asked if she was okay and stated that she shouldn’t be behind the wheel.” An employee says “this is why we’re concerned” at the start of the original video.

After this, another employee suggests calling the police, who, according to the TikToker’s follow-up, eventually came and charged the driver with several offenses. The TikToker posted a screenshot featuring the alleged charges. The case and citation numbers are not visible in the screenshot. The Daily Dot reached out to the local police department.

Commenters mocked the woman in the video, with many users calling her a “Karen.”

“When she stepped out of the car to be a Karen, Karma stepped in and really said ‘my pleasure,’” one joked.

“As someone who worked at [Chick-fil-A] for two years, I wish this happened to one of the many Karens we had,” another said.

Others made jokes about the entire situation, referencing the Chick-fil-A owners’ famously Christian beliefs.

“It was in park. Jesus put it in drive,” a user joked.

“Jesus in fact… Took the wheel,” another quipped.

“The lord said I giveth and I taketh away,” a third added.

Above all, users were thankful that everyone featured in the video is OK.

“Thank goodness there was a ditch and the car didn’t go into traffic,” a user wrote.

“Honestly the best thing that could have happened,” another said.

The Daily Dot reached out to @southernspice82 via TikTok comment.