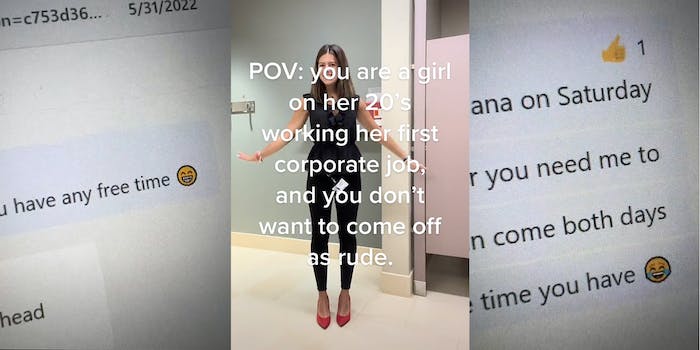 ‘POV you are a girl in her 20s working her first corporate job, and you don’t want to come off as rude’: Intern uses emoji to soften Slack messages, sparking debate

On Monday, a young woman showed messages of herself using smiling and laughing emoji to soften messages at her corporate internship in a viral TikTok, sparking debate about sexism and ageism in the workplace.

The viral video was posted by user Morena (@morefrejenal), a TikToker who has made multiple videos about her experience as an intern at a corporate workplace. Her most recent viral video, which has over 100,000 views, shows screenshots of what appear to be Slack messages with friendly emoji.

“POV: you are a girl [in] her 20’s working her first corporate job, and you don’t want to come off as rude,” the TikToker captioned the video.

In the viral video’s comments section, users said they had similar experiences changing their communication style in the workplace as young women.

“So accurate,” one TikToker commented.

“Yesss me,” another shared.

Many users encouraged the TikToker to be more assertive in her messages.

“After years in corp… my alter ego Brian writes the email. I just press send,” one user commented.

“This was me, stand up for yourself now and get used to asserting yourself. Future you will be so happy you did,” another advised.

On the flip side, one user implied everyone should be encouraged to communicate like this in the workplace.

“I do this too, there’s nothing wrong with wanting to be polite. Being more experienced isn’t an excuse to be a jerk,” the user commented.

Many women have come forward to say workplace communication is a double-edged sword: short, assertive emails are often perceived as rude, whereas polite, embellished emails can come off as unprofessional.

A multitude of women on TikTok have made videos about the pressures women face when communicating in the workplace. In viral videos, TikTokers have noted how they have noticed women more often apologize unnecessarily, use emoji and exclamation marks, and pose work requests as questions rather than demands compared to men. Studies have found women on average use more exclamation points than men, and also have found women tend to send longer emails than men.

As previously reported by the Daily Dot, other TikTokers have also made videos about ageism in the workplace, describing how they feel they have to adjust their behavior to appease older colleagues and be perceived as more “professional.”

Debates around preferences for informal work communications and the use of emoji have been increasing in recent years, with the use of social messaging platforms like Slack replacing formal email communications at work. According to a study of 2000 remote workplace users by Slack, most workers preferred to use informal language at work and believed emojis allowed them to be more authentic in their workplace communications. Some women have said emoji-use on Slack helps them appear more likable and at ease.

On the other hand, some individuals criticized casual communications on platforms like Slack for exacerbating sexist, racist, and ageist biases by encouraging public shaming and breaching the lines between personal and professional.

The Daily Dot reached out to TikToker Morena via Instagram message but did not hear back in time for the article’s publication.