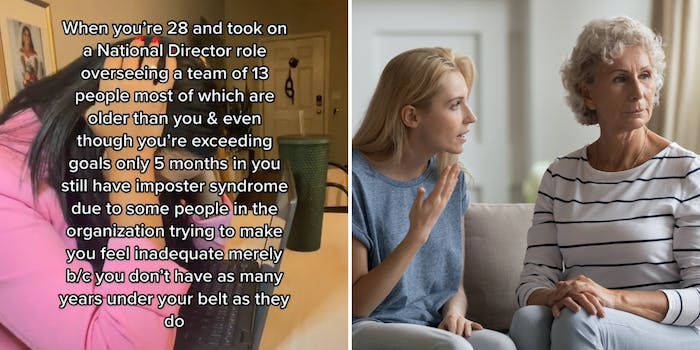 ‘Reverse ageism is real’: 28-year-old manager says some older members of her team don’t respect her

‘Sometimes I just wanna break down and quit.’

In a viral TikTok, a woman who says she is a director at a company described her alleged experience being looked down upon by her colleagues for her age. Users in the comments section shared their similar experiences with “reverse ageism.”

The viral TikTok, which has over 451,200 views, was posted in April by TikToker Amal Omar (@corporateamal). Omar frequently makes videos about her career and her experience as a manager. In the recent viral video, the TikToker puts her head in her hands with overlaid text written about her recent workplace experience.

“When you’re 28 and took on a National Director role overseeing a team of 13 people most of which are older than you & even though you’re exceeding goals only 5 months in you still have imposter syndrome due to some people in the organization trying to make you feel inadequate merely b/c you don’t have as many years under your belt as they do,” the TikToker wrote.

“Reverse ageism is real,” the TikToker captioned the video.

Users in the comments section discussed reverse ageism at work. Many validated and cheered on the TikToker.

“Someone thought you were capable. Just think of them and duck the rest!” one encouraged.

“You deserve it ALL girl! Don’t let others jealousy fueled negativity taint your confidence,” another praised.

“Thank you Riss, I needed to hear that. Sometimes I just wanna break down and quit,” the TikToker replied.

Others shared similar experiences of being looked down upon at work because of their young age.

“Reverse ageism is SO real. Dealt with it my entire career. Only way I solved it was quitting my job and creating my own company,” another shared.

“That is my dream!!!! Thanks for the inspiration,” Omar responded in the comments.

Omar has made multiple videos about reverse ageism on her account, including one video about not revealing her age at work to avoid discrimination and another video describing her boss valuing the opinion of an older, male colleague over her own.

Reverse ageism is a commonly discussed topic—one 2017 study by the American Psychological Association found 60% of office conflicts in larger companies to be caused by older workers having negative perceptions of their younger co-workers.

Other TikTokers spoke up about the effects of ageism on young people’s professional careers, including stories of women being treated like children in the workplace and older men talking over their co-workers at work.

The Daily Dot reached out to Amal Omar for comment via email.