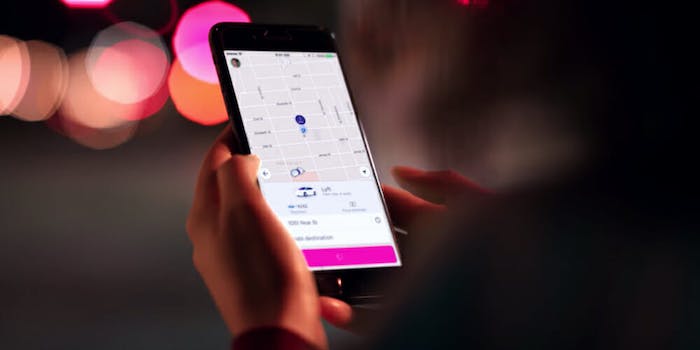 Woman says her Lyft driver turned off app, took her on a terrifying detour

Her driver took her so far that she lost cellphone reception.

A woman documented her harrowing Lyft experience in a Twitter thread Thursday. Author Kelly Barnhill’s driver turned the ride-sharing app off and took her on an hourlong detour to an isolated Texas road.

Barnhill shared the downright creepy account, which happened on Sunday when she was trying to get from an airport to a hotel in the Houston area.

The first thing he did was complain that the directions that the app gives him were "not the best way". I told him I have had similar gripes with google maps – always favoring packed freeways over zippy, pretty parkways. I ignore it a lot.

The driver was using the ruse of high traffic to take a different route. He then said he needed to stop for gas, which Barnhill reluctantly agreed to. He also repeatedly commented on how pretty Barnhill’s eyes were, leading her to ignore the comments.

Barnhill was supposed to arrive at 8:11pm, a time that kept getting pushed back as the ride wore on.

After Barnhill tried to humanize herself through casual conversation, she decided to focus on writing emails.

“It was getting dark,” she continued. “I didn’t realize that we were headed in the opposite direction of the city. It was getting darker. I wasn’t paying attention, focusing on trying to sound smart in an email using the tiny keyboard on my phone. I kept my eyes down.”

Barnhill’s emails weren’t sending. She then tried to call her husband, and that’s when she realized there was no cell service.

“Outside, I could see no city lights, no buildings, no nothing. Just an empty sweep of land and cows,” she wrote. She then questioned her driver, who told her to “relax” because he knew what he was doing.

"Are we going the right way?" I asked.
"Just relax," he said. "I know what I'm doing."
"Oh," I said. We were travelling at around ninety miles an hour. "Houston traffic?" I said.
"Yes. Houston traffic."

It was at this point that she started to panic and scrambled to properly navigate the situation.

Throughout the conversation, she craftily slipped in a fictitious account of an overbearing boss who is much too involved in her life.

“I told him that my boss literally knows where I am at all times. I told him that it meant that I never have a moment’s peace,” she wrote. “I told him that he knows when I’m running late and calls me to chew me out. And that I’m pretty sure my phone is listening and recording me all the time.”

The driver then “made a hard turn” because the traffic was conveniently better.

As soon as she received cell reception, she called her husband, who she pretended was her boss. She asked the driver what their estimated arrival was so she could tell her “boss.” This was likely a ploy to show the driver that someone knew her whereabouts.

She finally arrived at her destination, thanked the driver, and left. She had been on the ride for 90 minutes. The ride that was initially going to be $30 ended up costing her $94.

Barnhill wrote that she hadn’t heard from anyone from Lyft, only a bot named Max. It was only after the thread went viral that Lyft reached out to her.

When I talked to the gentleman on Sunday, I said "This man should not be driving anyone through your service."
He said, "We can set it up so he can't pick YOU up anymore."
I said, "He needs to not pick up ANYONE."
He said, "I've flagged him for investigation."

The company admitted it did not initially handle the situation properly.

“The behavior described is troubling and unacceptable. Upon becoming aware of the allegations we initiated an investigation, deactivated the driver, and reached out to the passenger to express our support,” Lyft spokesperson Campbell Matthews told the Daily Dot.

Riders can end a ride at any time or call Lyft’s Trust and Safety team through a hotline, according to the company. Those two options were unavailable to Barnhill because the app was turned off, and she didn’t have a cellphone signal.

Following her thread, others shared similar experiences. It seems that women—drivers and passengers alike—often feel such vulnerability.

I had an extremely similar experience, also with @lyft. In my case, it escalated to an assault. But the way the driver talked and acted right out the gate, and my instinctual reflexes about how to handle it, were identical to here. As was Lyft's complete silence after I reported.

In very bad areas. One night I ended up picking up food from a lone guys house on a bad side of town and sat there waiting on it scared to death. As a rape survivor it was horrifying. I called support to tell them and was belittled and basically told I was wrong.

this tweet is brought to you by a very uncomfortable ride i had the other day pic.twitter.com/4Dc8elqBXp

I cannot imagine having to endure a ride like this.

This past Tuesday I had a horrible experience with @lyft where my driver started driving down a one-way street with two lanes of traffic coming at us laying on their horns. https://t.co/JdEIFByQtj

I called a @lyft. I put in 2 locations. The driver ignored the 1st but I didn’t know bc I was unfamiliar w/area. It was dark; I didn’t know where I was. When I realized, he was aloof and unconcerned. I felt unsafe. I was alone. @lyft didn’t give me the time of day.😢

My @lyft driver masturbated during my 12 min drive to work (-: They haven’t refunded me but a police report and everything has been filed. I haven’t rode since, I’m scarred. I take buses or ask someone for a ride, I hate being vulnerable. I truly do.

At the end of the discussion, there was a realization that women tend to be vulnerable in almost all situations.

But here's the thing: as I sat in the back of that car, as I watched the world get dark and the land stretch away on either side of the road, I realized that it isn't that I'm vulnerable right now (though I was). We're vulnerable EVERY TIME.

My dudes, in case you haven't been paying attention, this is most women's worst nightmare: being vulnerable, alone, with a man, no ready escape, no one knows where to look for her if she goes missing.

We live in constant fear. We know we are always vulnerable. https://t.co/9yEpH5tfNX

All Lyft drivers go through annual criminal background checks and continuous “criminal monitoring,” according to the company.

A 2018 CNN report found that in a four-year span, more than 100 Uber drivers in the U.S. had been accused of sexually assaulting or abusing passengers. There are extensive measures women take, often by default or as encouraged through blogs, to ensure their own protection.

The Daily Dot has reached out to Kelly Barnhill.