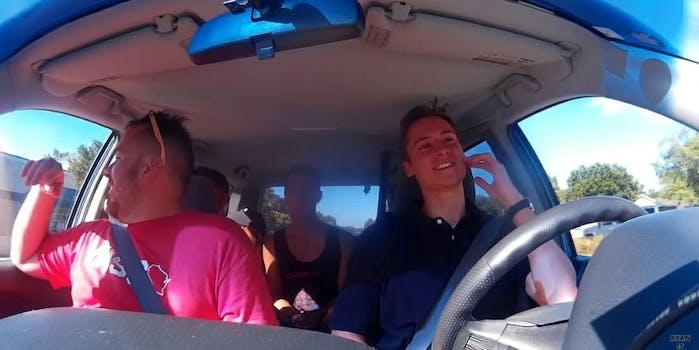 He said the channel 'was good for my soul.'

The popular YouTuber Ryan Is Driving, who made videos about driving for Uber, has been fired by the ride-sharing company for apparently violating its policy on video recording riders.

Not that he was shocked by his dismal, especially considering Uber tweaked its policy on allowing drivers to record their passengers. Last year, Uber said that while drivers can record rides for safety, “broadcasting a person’s image, audio or video recording is a violation of (Uber’s) terms and may result in loss of account access.”

The YouTuber knew at that point that his driving career wouldn’t last forever.

“I can’t be mad. It’s Uber’s thing,” he said in a video released Thursday. “They changed their policy. For whatever reason, they just decided to terminate me. It’s kind of sad.”

Ryan started sharing his Uber rides three years ago, and the YouTube channel, which had grown to 832,000 subscribers, featured him schlepping his Uber passengers around Charleston, South Carolina. It wasn’t as bawdy as the old HBO show Taxicab Confessions or as obnoxious as Cash Cab. Instead, it showed Ryan getting into adventures with the passengers who helped steer him there.

Considering he dealt with many intoxicated people at closing time, it was mostly a wholesome channel. It also helped him grow as a person.

“I really saw that what I was experiencing in the middle of the night with complete strangers in the intimate environment that was my Honda Pilot was something beautiful,” he said. “It was funny and interesting and entertaining … It was good for my soul.”

Ryan continued, “The whole thing is me just kind of somehow succeeding at this shot in the fucking dark, where I’m feeling this is something good and feeling the energy is something I want to turn into something more. It really had such humble beginnings. I was so broke. I was so alone. I felt lost at the beginning.”

But Ryan said he found himself by making connections and creating content.

Ryan—who came to many viewers’ attention when he exposed a woman trying to get a free ride off him—said Uber asked him to take down all of his videos.

“I can’t do that. I’m not going to do that,” Ryan said. “I will politely step down from my position as an Uber driver. But I’m not going to destroy what I made here. It’s very important to me. On the surface, it might be just me having fun with drunk people in the middle of the night. But it’s more than that. It’s me being comfortable with myself. It’s me growing.”