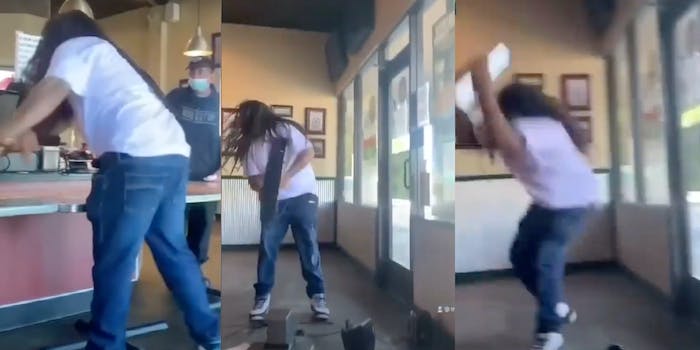 He could end up getting charged thousands of dollars for his rampage.

A TikTok video captured the exact moment a Wingstop customer lost his cool after the restaurant messed up his order.

Video of the incident, which happened in California, shows the customer throwing Wingstop’s cash register through the window after they messed up his order twice and wouldn’t give him a refund.

An employee responds: “It’s either you get the food remade and you go on about your day and stop yelling at my other manager, because that’s, no, it’s uncalled for.”

The man then proceeds to rip the cash register off the counter at a Wingstop location in Antelope and slam it to the ground, twice. He then throws the register out of the window. Video of the incident appears to censor the man letting off a series of expletives.

The manager of the location told KOVR that the man claimed he was missing wings. But refunds are not allowed under company policy for online orders, he said.

It’s not immediately clear what the man originally ordered nor how much he sought to be reimbursed. According to Daily Mail, though, he might end up getting charged thousands of dollars for his rampage.

The store’s manager told KOVR that replacing the register will cost around $6,000. Wingstop is awaiting a quote to fix the busted mirror.