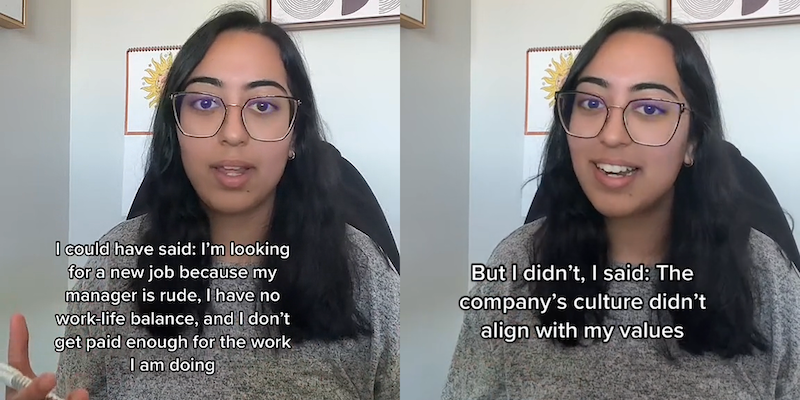 'I don’t get paid enough for the work I am doing.'

Using a viral Ariana Grande sound, TikToker and career coach Anji (@advisedbyanji) made a pop culture reference work as a teaching moment for those looking for a job.

The sound is a clip from an interview from The Zach Sang Show where Grande claimed she could’ve used the lyrics “wrote some songs about Ricky, nevermind he’s trash.” But instead, she said “now I listen and laugh,” in regards to her song “thank u, next.”

Anji used the comparison from Grande to tell users that trashing your ex-employer is not how to deal with a question in an interview: Why did you leave your last company?

“I could have said: I’m looking for a new job because my manager is rude, I have no work-life balance, and I don’t get paid enough for the work I am doing,” the overlay text read.

Instead, she encouraged users to say, “the company’s culture didn’t align with my values.”

In the comments section, users asked Anji questions and thanked her for the advice.

“I have an interview tomorrow, I’m going to use this,” one user claimed

“I wonder what’s the point of even asking if the interviewer knows you’re most likely lying anyway. All part of the ritual I guess,” another user commented.

The Daily Dot reached out to Anji via email.