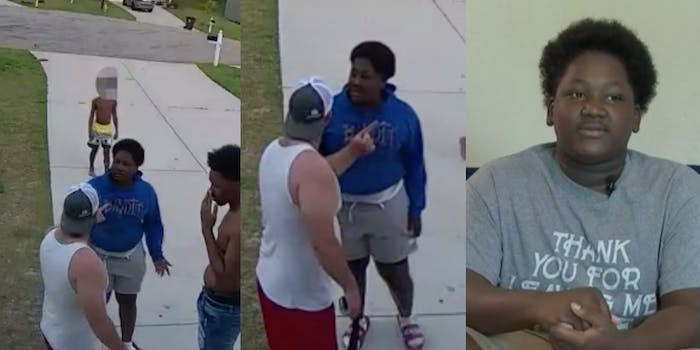 'I could not believe that in 2021 a fully grown man would think that it was OK to come outside with a belt.'

A white man wielding a belt was captured on security footage charging at and pushing a Black teen in Georgia. He allegedly beat the teen with the belt, according to 11Alive.

Twenty-nine-year-old Matt Martel allegedly attacked the 15-year-old over his use of profanity, according to an interview with police. The entire incident was captured on security footage.

The teen’s mother, Latika Sim, said her son, Malyik, is capable of defending himself but didn’t do so over concerns that he may get in trouble.

“My son played football, he has played every sport, he is capable of defending himself,” Sim said in an interview with 11Alive. “But the reality is he knows he could not defend himself. So he walked away.”

“I was just panicked. I could not believe that in 2021 a fully grown man would think that it was OK to come outside with a belt.”

Malyik was reportedly outside playing basketball with his cousins when Martel came charging onto the driveway.

“When you see the video, [Martel] is running full speed at him and he’s caught off guard,” Sim said.

In the grainy security video, Malyik can be seen conversing with his cousins when a figure enters from off-screen at a run. He approaches Malyik and appears to grab him, backing him rapidly off-screen before a loud sound is heard.

According to Malyik, Martel was “holding me with his hand on my neck.”

“He threw me up against the garage, I hit my head,” he said.

According to Raw Story, Martel told police he was upset after hearing the teens using profanity. Sim said she would have preferred if Martel had shared his concerns over her son’s language with her, rather than act aggressively with a group of teenagers.

“I have worked in child care for 15 years,” she said. “I have had kids say crazy things to me, I have had kids throw things at me, I have never once thought ‘you know what let me take my belt off and beat someone else’s kid.’ So even when he’s texting saying he heard my son say a curse word, I do not care.”

“Everybody else’s kids are outside playing, so why my kids can’t go outside and play too,” she added.

Martel was arrested and charged with assault, battery, cruelty to children, and disorderly conduct, according to 11Alive.