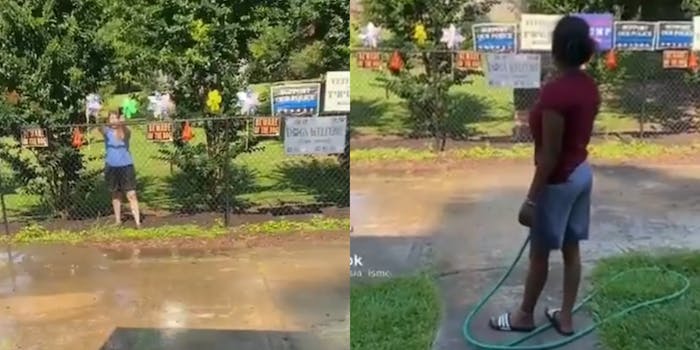 'Why do people put so much effort and energy into being racist?'

A viral TikTok video shows a white woman spraying a water hose at her Black neighbor who was cleaning her grill outside.

Originally filmed and posted by @denisia_isme, the daughter of the Black woman shown, the footage from Georgia shows a white woman standing behind a Trump paraphernalia-covered fence, spraying her hose at the mother. The viral video has since been deleted from the TikTok page but was captured and reposted by @Tim_Tweeted to Twitter.

“My mom outside cleaning the grill, and this is what she does,” says the videographer, referring to the white woman.

The white woman warbles from across the road, saying, “All you wanna do is fight and run your damn f*cking mouth!”

The woman sprays her hose at the Black neighbor.

“You’re the one who started it, though,” says @denisia_isme. “She ain’t do nothing to you. You’re doing way too much. You want somebody to touch you.”

“Early in the morning, and my neighbor wanna be racist,” @denisia_isme says.

@denisia_isme starts filming the apparent Trump supporter’s lawn chairs and pointing out how each is pointed toward the Black neighbors’ home.

“Everything is facing us,” she says, showing the long line of chairs. “And she harasses us every single f*cking day.”

The white woman then tells one of them to “bring it.”

@denisia_isme’s mother says, mocking the woman in a high-pitched voice, “Come on, Karen.”

“She wants to fight,” replies the white woman, pointing at @denisia_isme. The video ends here, but the action continued among viewers.

“Why do people put so much effort and energy into being racist?” tweeted @BurgundySunrise. “The daily effort to be so hateful and evil. So vile. I will never understand that.”

@denisia_isme did not immediately respond to the Daily Dot’s request for comment.