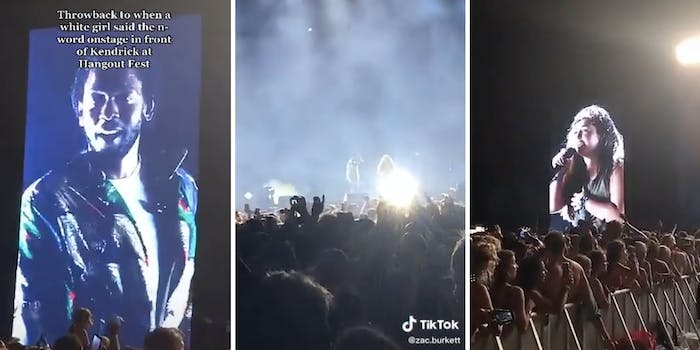 A video from four years ago has led to online debate—again.

An old controversy featuring Kendrick Lamar has been rekindled after a video of a 2018 concert went viral this week on TikTok.

In 2018, Lamar invited two fans, Rohan and Delaney, onstage to rap along to his song “m.A.A.d city.” While Rohan omitted the N-word from the lyrics, Delaney did not. This led Lamar to stop the song and chastise her for using the word.

“My boy Rohan kinda knew the rules a little bit,” Lamar says in the video. “You gotta bleep one single word.”

Delaney was initially confused, asking, “Am I not cool enough for you?” She then became apologetic: “I’m used to singing it like you wrote it!” Lamar eventually allowed her to try the song again.

A portion of this incident went viral on TikTok this week, accumulating over 2 million views.

A full video of the incident can be found on YouTube.

Lamar commented on the incident in a 2018 interview with Vanity Fair.

“Let me put it to you in its simplest form. I’ve been on this earth for 30 years, and there’s been so many things a Caucasian person said I couldn’t do. Get good credit. Buy a house in an urban city. So many things—’you can’t do that’—whether it’s from afar or close up,” he told writer Lisa Robinson. “So if I say this is my word, let me have this one word, please let me have that word.”

On his new album Mr. Morale & the Big Steppers, Lamar reflects on the incident further, comparing Delaney’s use of the N-word to his own use of a homophobic slur in the past.

“See, I was taught words was nothing more than a sound /If ever they was pronounced without any intentions / The very second you challenged the shit I was kicking,” he raps in the track “Auntie Diaries.”

He even notes the situation specifically, continuing:

“Reminded me about a show I did out the city / That time I brung a fan on stage to rap / But disapproved the word that she couldn’t say with me / You said, ‘Kendrick, ain’t no room for contradiction / To truly understand love, switch position / ‘[F-slur], [F-slur], [F-slur],’ we can say it together / But only if you let a white girl say ‘[N-word].’’”

An annotation on Genius explains that these lyrics intend to challenge the audience’s biases as well as Lamar’s.

“If he truly holds the belief that words are nothing more than sounds without intent, then he either needs to embrace non-Black people using the N-word or must reject all slurs equally; if one means something then so does the other,” the annotation reads. “There is ‘no room for contradiction,’ as Mary-Ann says.”

In the comments section on TikTok, users once again mocked Delaney while discussing the specifics of the incident.

“Why did he even bring her up there,” one user asked.

“Man’s was flabbergasted,” another added.

“The fact that’s she just didn’t get it and kept embarrassing herself,” a third noted.

Others commented on the discourse that surrounded this incident back in 2018. At the time, a few online accused Lamar of “setting up” the girl, per Newsweek. This explanation did not make sense to TikTokers.

“i will literally never forget this and people stay saying he ‘set her up’ like ???? what r u literally talking about,” one viewer wrote.

Comments like these reignited the debate from four years ago.

One user responded, “He got her up on stage to sing his song and then grilled her for singing his song… not that hard to understand where people are coming from.”

“Kendrick weirdly told her to sing all of it then did this too so. Idk man, seems like he baited her tbh. Also the fans there didn’t care til he did,” another added.

“If it’s in the song then there is no problem saying it,” a third user argued.

However, most commenters were in agreement that Delaney was in the wrong—and were sure that she continues to be embarrassed by this incident.

As one user wrote, “She def thinks about this daily.”