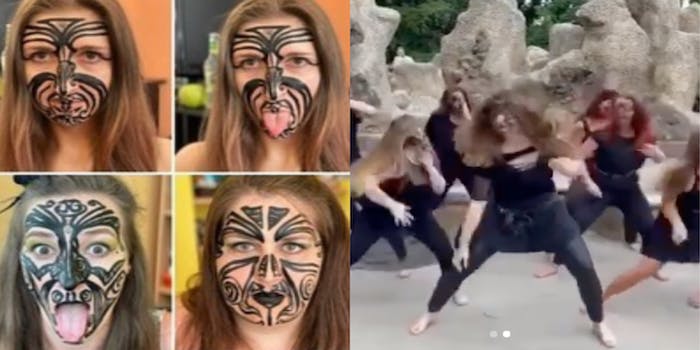 A group of white dancers from the Czech Republic is receiving backlash after posting a video on Instagram wearing black face paint while performing a “Bollywood Haka” dance.

“That’s not dance fusion,” one user commented. “That is truly awful cultural appropriation.”

The video was posted by choreographer and performer Jarmila Chromíková with hashtags like #bollyhaka, #facepainting, and #newzealandinspiration. While versed in many dance styles, she specializes in Bollywood dance, a fusion of India’s classical and folk dances with other elements like jazz and hip-hop.

The video and photos of the performers wearing black face paint mimicking the cultural tattoos, Ta Moko and Moko Kauae, worn by New Zealand’s Indigenous Māori, were commented on by people online as blatant racism and a caricaturization of Māori as savages and aggressive.

“They really put the colon in colonisation!” one user commented.

The face paint was also seen as similar to blackface, which has historically been used to stereotypically and harmfully portray Black people in comedy routines or acting performances.

The dance’s fusion of Bollywood and Haka, a ceremonial Māori dance used on the battlefield or during celebrations, was also blasted online as a disrespectful display of cultural appropriation.

“Wow! They managed to mock and insult Black people, Indians and Māori all together,” one user commented. “Some peak white supremacy right here!”

Shaneel Lal, co-founder of End Conversion Therapy in New Zealand, reshared the original post’s video and photos, saying, “Blackface is part of a history of dehumanization, of denied citizenship, and of efforts to excuse and justify state violence.”

“It is time to stop with the dismissive arguments those that describe these offensive acts as pranks, ignorance and youthful indiscretions,” Lal continued.

Lal wrote that the ability to be ignorant of the consequences of racial bigotry is the defining element of privilege.

“Sometimes they imitate cultural tattoos and other times, they put on Black face and call it ‘bad makeup,’” Lal wrote.

The original post has since been taken down, and Chromíková made her Instagram profile private. Chromíková did not immediately respond to the Daily Dot’s request for comment.