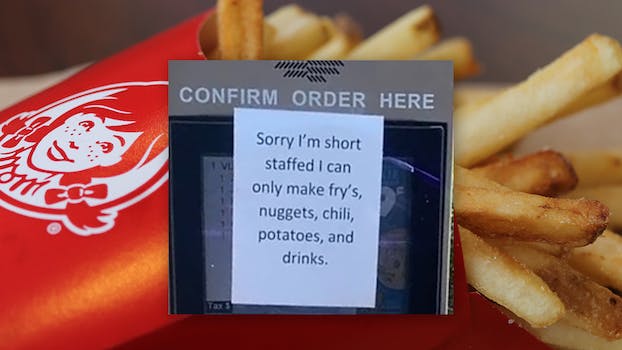 The poster of the video received backlash for using the ‘oh the ghetto’ sound.

A viral TikTok video features a sign in the drive-thru at a “short-staffed” Wendy’s in Las Vegas. The sign notes the location has the ability to make just a few items on the regular menu, prompting viewers to feel sorry for the employees.

The video was posted by @laurenbest5, who was in the drive-thru line at a Las Vegas-area Wendy’s. The caption reads: “How u short staffed cant make no burgers #wendys #ghetto #fyp #justjoking #shortstaffed #vegaslocal.”

The sign featured in the video reads: “Sorry I’m short staffed. I can only make [fries] nuggets, chili, potatoes, and drinks.”

The video has been viewed 73,000 times since being posted on Aug. 25. People in the comments section felt sorry for the workers and noted that the customer should be thankful that the workers left were apparently trying their best. Comments on the clip were eventually turned off.

The TikToker eventually posted a followup video addressing “everybody (being) so mad in (her) comments” and defending herself for using music with the “oh the ghetto” sound bite.

“Y’all took that totally left,” she says. “Ya’ll are so pressed, when I felt bad for them people. It was like like five people in there, first of all. Second of all, I didn’t even order food. Third, I was on my lunch break. … You guys are just popping it, popping it, popping it, don’t even know what happened. I tipped them people, and who gets tipped at Wendy’s?”

“Y’all take that left because that’s what social media and society wants y’all to do. … Chill out. Don’t try to come for me, because I don’t send for you, you understand?” she continues. “It’s just a video; like, chill out. Or go work there; clearly they need help, right?”

The Daily Dot has reached out to Wendy’s.