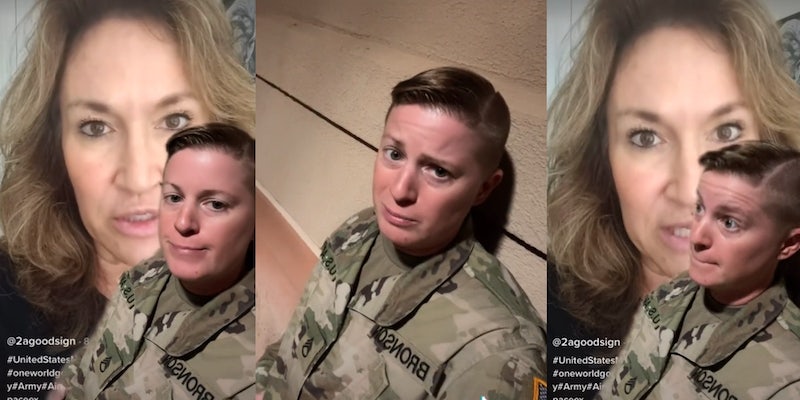 A U.S. service member is calling out a conservative TikTok user who stated that gun owners were ready to start a “bloodbath” if the military didn’t rise up against the government.

In footage that has been viewed more than 1.1 million times, a soldier known on TikTok as Lord Daddy Nugget pushes back on a woman named Jodi for what she sees as a potential terrorist threat.

The video begins with Jodi sending a message to numerous branches of the U.S. military as well as the private rocket manufacturer “SpaceX,” a likely mistake intended instead to refer to the U.S. Space Force.

“Everybody that considers themselves a person that would defend this fucking country, where are you?” Jodi asks.

“I’m at work, defending this fucking country,” the soldier replies.

After Jodi notes that soldiers are required to take an oath to defend the country from enemies both foreign and domestic, the soldier agrees before pointing out a recent incident in which a woman in Tennessee drove her vehicle through a vaccination site run by the National Guard.

“We did take that oath to protect and defend the Constitution against all enemies foreign and domestic,” the soldier replies. “You know, domestic. Like the woman who decided to drive her vehicle through a National Guard vaccination tent.”

Jodi’s remarks become increasingly dark after she mentions the supposed willingness of millions of gun owners to start a “fucking bloodbath.”

“Where are you military because if you are leaving it up to the American people you need to let us know because everybody’s on the edge of their seat,” Jodi adds. “You got millions and millions of gun owners that are ready to walk out and just start a complete fucking bloodbath…”

The soldier was quick to remind the woman of the Insurrection Act, a law that permits a president to deploy troops domestically to quell insurrections, before noting that her comments could be seen as a terroristic threat.

In the wake of the video, Jodi has made her TikTok account private. Numerous users also stated that they reported the woman to the FBI.