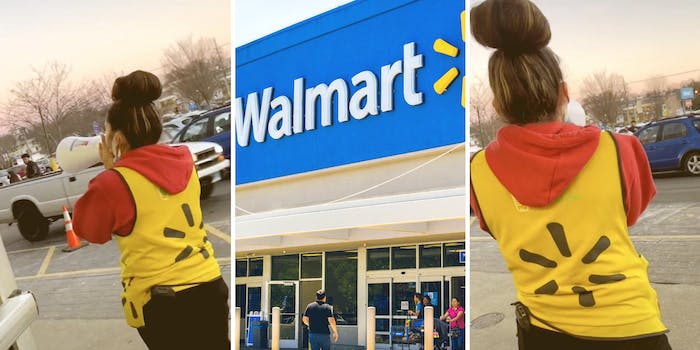 ‘When no one listens to you’: Customers ignore Walmart worker announcing store’s closure in viral TikTok

'People will ignore the sign and break into the locked doors and ask why they were locked. They're really that dense.'

A viral TikTok showed multiple people ignoring a Walmart employee as she yelled multiple times that the store was closed.

In the video, viewers can see the worker using a megaphone to announce that Walmart was closed. However, people apparently continued to approach the locked doors. “Bitch we’re closed!” the person behind the camera can be heard saying jokingly.

The video received over 2 million views and over 1,000 comments from people empathizing with the employee.

“‘Lock the doors put a sign’. People will ignore the sign and break into the locked doors and ask why they were locked. They’re really that dense,” one person wrote in the comments section.

Another person said, “With all these pranks nowadays, I wouldn’t believe y’all either!”

“OMG I DO THIS AND THEY STILL TRYNA WALK IN,” one viewer shared.

The creator of the video uploaded a follow-up post explaining more about the situation. “We did lock the doors, the exits, and the entrances,” she says in the video, “And we did have a sign up telling them that Walmart is closed.” She continued to say that nobody listened to them. Instead, people walked by her and her coworkers, staring at them. The creator explained that they closed to sanitize, clean, and restock the store.

The Daily Dot reached out to the creator via TikTok comment but did not immediately receive a response.