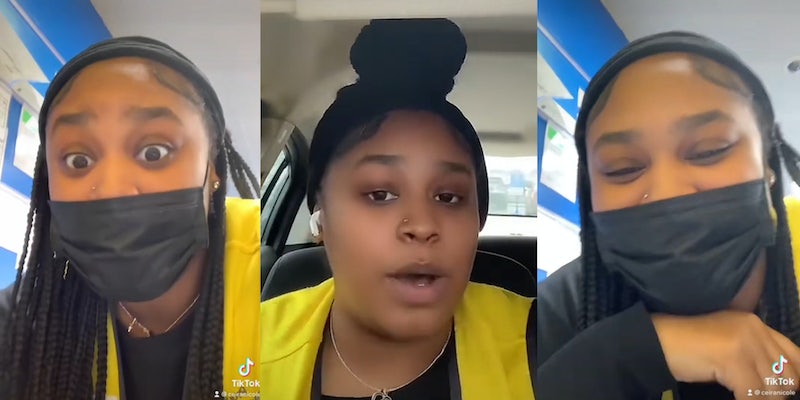 ‘Hanging up on a rude customer is one of the most satisfying experiences’: Walmart worker repeatedly hangs up on customer, sparking debate

'Sometimes you have to remind them who’s the one in need in the situation.'

A former Walmart employee has gone viral after posting a video that appears to show them repeatedly hanging up on a customer.

In the video posted by user Cee (@ceiranicole), one can see her hang up on the customer over and over, frequently laughing as she does so.

According to Cee, her interactions with the customer were pleasant until she informed the customer that all of her managers were in a meeting. At that point, the customer insisted she get a manager and addressed Cee as “ghetto girl,” which both surprised Cee and led her to hang up on the customer.

The customer continued to call back, and Cee began recording. The TikTok documenting this series of hang-ups currently has over 1.6 million views.

The video begins after Cee has already hung up at least one time.

“I don’t know who you think you are that you think you can hang up in my face, but you’re not going to do it again,” the customer says.

“Get me a manager on this—” the customer starts before Cee hangs up on her, collapsing into laughter.

Over the course of the video, interactions like these happen several more times. The customer insists she be connected with a manager, she is once again informed that the managers are in a meeting, she gets upset, and Cee hangs up on her.

After several calls, Cee says that no matter how many times the woman calls, she’s going to keep getting Cee on the other end, as yet again, the managers are in a meeting.

“Well I am glad that you’re the only one that I’m going to get because now they’ll know who’s been such a bitch,” the customer states.

This results in another interaction, during which Cee hangs up.

In the comments, Cee said that she was initially more than happy to assist the customer—”but not after she called me ghetto & wanted to argue.”

“If she would’ve told me what she wanted I could’ve helped her,” she later added in comments.

Some TikTok commenters supported Cee, offering their own thoughts on the situation.

“Hanging up on a rude customer is one of the most satisfying experiences,” one user wrote. “Sometimes you have to remind them who’s the one in need in the situation.”

“When will they realize if they treat people with basic respect they will get what they need faster,” a second user added.

“Thanks sincerely from everybody who gotta talk to customers on the phone all day,” a third shared.

However, some took the opposing view, saying that Cee was wrong for doing this regardless of customer behavior.

“Why all walmart employees think they’re so tough,” asked a commenter. “It’s so much easier to be nice, and you think this shits funny.”

In response to comments like these, Cee posted a follow-up video further explaining what happened and the reality of working at Walmart in general.

“A lot of people’s problem when I was working there,” she starts, “they feel like they could just go off on you because, you know, they’re not getting their way.”

“But if it’s something that I cannot handle or control, then what the eff do you want me to do?” Cee asks. “Y’all be wanting us to bend over backwards, do a split…for y’all, and that’s not how it work.”

Many users agreed with Cee.

“The thing is, you are not required to be disrespected or abused by customers,” a commenter said. “You were helping train her to be respectful for the next!!!”

“People know you’re at work and they abuse that power dynamic,” another added. “She wouldn’t talk to you like that if you weren’t at work!! you handled it well tbh.”

Today, Cee says she no longer works at Walmart. “…God blessed me with a better paying job,” she wrote in a comment.