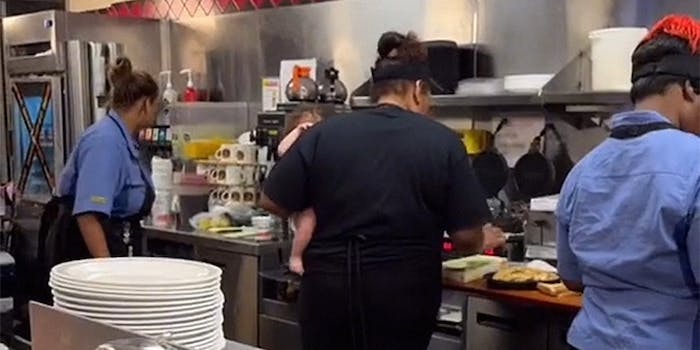 'Y'all have the audacity to shame her.'

A TikTok showing a Waffle House employee carrying around a baby while she worked in the kitchen has viewers conflicted.

@kizzle360 posted the video to TikTok alongside the text “Aint’ know why she got her baby in here smh.” The video itself is just a 12-second clip of a woman with a young child on her hip working one-handed to help prep food. Since being posted two days ago, it’s accumulated 3.7 million views.

While the original poster’s tone seems to be intended to shame the woman for having a child at work, very few viewers agreed with that sentiment.

“So you telling me, she had to hold her baby at 25-30 pounds AND do her job and y’all have the audacity to shame her… she doing what she has to,” wrote @haleyhull129.

“Nothing but respect tbh,” @angryreactions added.

Another TikToker theorized that “this was probably her last resort,” while @gracethisplace used it as an example of why “we need to get free childcare.”

Without knowing further context, many lamented the difficult position working mothers are often put in when they can’t afford childcare or something falls through at the last moment. Without a solid support system in place, having to choose between making sure your child is safe and looked after or making enough money for bills and keeping your job is an impossible position for struggling parents.

But in this case, TikToker @tiffanyclark842 came forward and claimed to be the person in the video and said that the situation was a little different than what people had interpreted.

The baby, she says, was actually her niece, who was about to be taken away by social services if she didn’t take her right then. But when they brought the child to her, she still had an hour on her shift so she made due.

She also added that her “big boss” just found out about her having a baby at work after the TikTok went viral, so she’s waiting to find out if there are any consequences.

“We should be giving her love respect and help,” wrote @kylanablackwolf6 after hearing her story.

The Daily Dot has reached out to @tiffanyclark842 via TikTok comment.