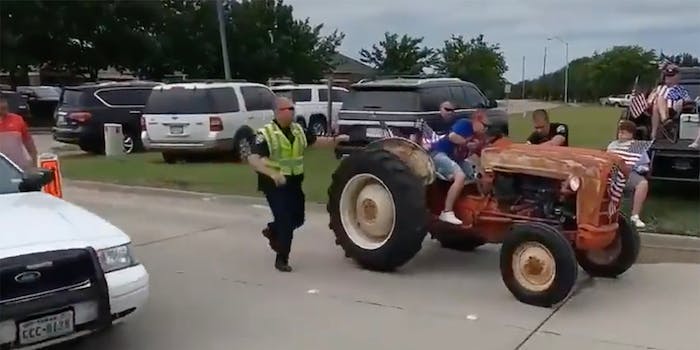 ‘What the f*ck?’: Video shows police chasing down white woman on tractor who tries to evade arrest

A 60-year-old white woman in Rockwall, Texas, who wasn’t allowed to take her tractor into a Fourth of July parade led police on a brief, medium-speed chase before being arrested on several charges.

The incident, as bizarre and even as amusing as some found it, led to questions about how her arrest was handled and double standards of policing for white and Black suspects.

The incident, according to the Dallas Morning News report, occurred after Laurie Bostic was informed that she and her tractor weren’t welcome in Rockwall’s Fourth of July parade.

Video, originally posted to the @philtheroofer TikTok account, shows Bostic driving onto the parade route with her tractor as three police officers on foot chase behind. Eventually, Bostic gathers speed and leaves the officers behind.

The video also shows a handcuffed Bostic being led into a squad car by two officers, and the person taking footage speaks with an officer about the incident. The officer asks him to step back but allows him to keep filming. The filmer boasts, “I got it all on video!” The officer flatly replies, “OK, great.”

“The person cussing in front of families at a parade is the one that needed arrested,” one TikToker said of the person filming, who at one point exclaimed, “What the fuck?”

On Reddit, one person queried, “Why didn’t they just shoot her?” and another equally flippant person responded, “She ain’t Black.”

Twitter users made similar comments about white privilege and the double standards of police brutality, which disproportionately targets Black people. “No instant use of live ammunition to her back, no electric stun gun directly shot to the heart, no knee to the trachea for 9+ minutes?” one user wrote.

One user remarked, “I don’t want to see anyone become a victim of police brutality. It’s like a strange bloodlust for some.”

That led another person to chime in, “No one wants to see it. But it has to be highlighted that there’s a major difference in how they respond to issues when people are black vs what you see above.”

Bostic has been charged with evading arrest, a third-degree felony, according to the Dallas Morning News account, along with three misdemeanor counts including interfering with a processional, disorderly conduct, and criminal mischief.